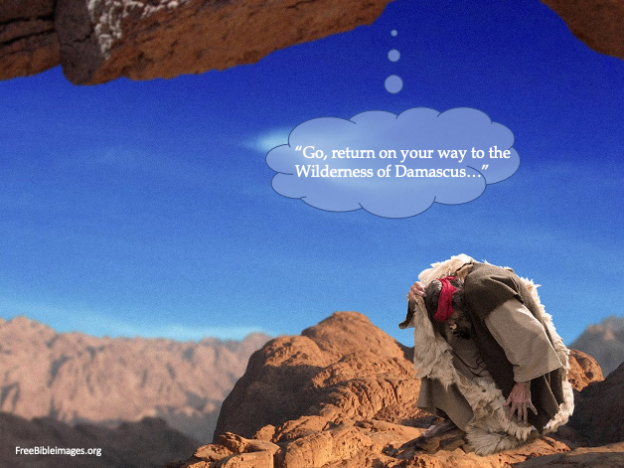 Twice God asked Elijah what he was doing in the cave (I Kings 19:9, 13). This stresses Elijah’s need to talk and change his perspective. But look at Elijah’s response the second time God asks this question. “And he said, ‘I have been very zealous for the Lord God of hosts; because the children of Israel have forsaken Your covenant, torn down Your altars, and killed Your prophets with the sword. I alone am left; and they seek to take my life.’ ” (I Kings 19:14). Notice that Elijah’s response is no different than his first response.He still feels angry, alone, and afraid.

How does God respond to this? “15 Then the Lord said to him: ‘Go, return on your way to the Wilderness of Damascus; and when you arrive, anoint Hazael as king over Syria. 16 Also you shall anoint Jehu the son of Nimshi as king over Israel. And Elisha the son of Shaphat of Abel Meholah you shall anoint as prophet in your place. 17 It shall be that whoever escapes the sword of Hazael, Jehu will kill; and whoever escapes the sword of Jehu, Elisha will kill.” (I Kings 19:15-17). God doesn’t seem to address Elijah’s answer. Why? Doesn’t He care? Yes, He cares so much that He wants Elijah to go beyond sharing his feelings to sharing his life with others. God gives Elijah a new job to do which gives him a renewed sense of hope and purpose.

From this interaction we learn the next step to take to climb out of the pit of discouragement: LET GOD GIVE US A NEW DIRECTION (I Kings 19:14-17). God put Elijah back to work. He did not give Elijah a big dramatic assignment like on Mt. Carmel. He gave him a smaller assignment designed to renew his sense of hope that God can still use him. He was to anoint two kings who would wipe out his antagonists and Elisha who would take over his role as prophet. ﻿

“Through these three men God would complete the purge of Baal worship that Elijah had begun. Actually Elijah did only the last of these three directly, but he did the other two indirectly through Elisha, his protégé. Elisha was involved, though strangely, in Hazael’s becoming Aram’s king (2 Kings 8:7-14) and one of Elisha’s associates anointed Jehu (2 Kings 9:1-3).” 1

When we are discouraged, we need to know that God is not done with us. Also, the quickest way to defeat discouragement is to quit sitting around in self-pity and start helping others. This gets our eyes off ourselves and onto to those who need our help. If we are constantly looking at ourselves and our problems, we are going to get discouraged. But if we are going to climb out of the pit of discouragement, we must get involved in helping other people.

God encourages us when we are discouraged so we may encourage others when they find themselves in the pit of discouragement. The Bible says, “3 Blessed be the God and Father of our Lord Jesus Christ, the Father of mercies and God of all comfort, 4 who comforts us in all our tribulation, that we may be able to comfort those who are in any trouble, with the comfort with which we ourselves are comforted by God.” (2 Corinthians 1:3-4). Who better to minister to someone who is depressed than someone who has battled depression? God does not waste our experiences. He will use them to equip us to minister to others.

Prayer: Gracious God, thank You for caring about us enough to help us go beyond sharing our feelings to sharing our lives with others. You are an amazing God who uses our struggles to equip us to minister to others with similar struggles. Thank You for not giving up on Elijah when He was at the bottom of the pit of discouragement. And thank You for not giving up on us. Help us to move beyond self-pity to sacrificial service for others. Please lead us to those who need encouragement. And when You do, show us the best way to bless them. In the mighty name of Jesus Christ we pray. Amen. 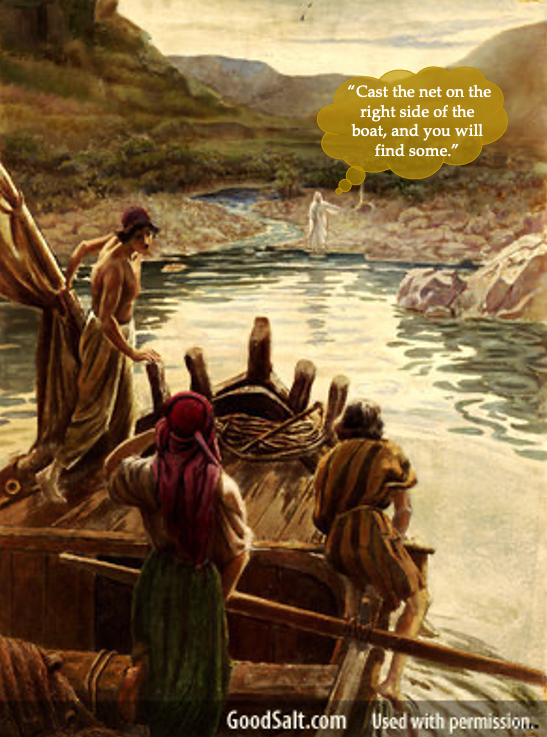 “And He said to them, ‘Cast the net on the right side of the boat, and you will find some.’ So they cast, and now they were not able to draw it in because of the multitude of fish.” John 21:6

After Jesus’ death and resurrection, John records several post-resurrection appearances of Jesus. In John 21:1-14, he records the fourth appearance of the risen Christ involving seven of His disciples. These verses teach us several important lessons from the risen Lord Jesus. So far we have learned …

– Failure and discouragement are often connected to the risen Lord Jesus’ purpose for our lives (John 21:1-3).

We are now ready for our third lesson from Jesus. After Peter and the six other disciples went fishing all night without catching any fish, Jesus appeared to them on the shore in the early morning, but the disciples did not realize it was Christ (John 21:3-4). When Jesus asked them, “Children, have you any food?” they replied, “No.” (John 21:5). Jesus asked this question of the disciples to help them see their own inadequacy and to prepare them for what He was about to do next.

Christ now offers these unsuccessful fishermen some advice: “Cast the net on the right side of the boat, and you will find some.” (John 21:6a). Peter and some of the other disciples were fisherman by profession. They were no doubt irritated at their lack of success during the night. And now a Stranger on the shore was telling them how to do their job better? It takes humility for a fisherman to accept advice from a non-fisherman. But Jesus, the Son of God and Creator, knew where the fish were. Maybe the disciples thought this Stranger on the shore could see a school of fish near the surface of the water. 1 After all, He promised them a catch if they obeyed His command.

“Their nets had been hanging over the left (port) side of the fishing boat. The unknown ‘authority’ on the shore now promised that if they would ‘cast the net on the right-hand [starboard] side,’ they would catch some fish… Such a suggestion must have seemed ludicrous to these seasoned fishermen. The idea that such an insignificant change would accomplish anything was laughable. Yet amazingly the disciples followed Jesus’ orders. Perhaps it was the authoritativeness of Jesus’ command that explains their readiness.” 2

Maybe they obeyed Jesus’ command because it “might have reminded Peter, James, and John that after another night without a catch the Lord Jesus had told them something quite similar that resulted in a record catch (cf. Luke 5:4-10).” 3

When the disciples obeyed Jesus’ command they were richly rewarded. John tells us, “they were not able to draw it [the net] in because of the multitude of fish.” (John 21:6b). The net was so full of fish they could not haul it back into the boat. The imperfect tense (ischuon) of the verb ischuō portrays the disciples repeatedly tugging at the heavy net. 4

Jesus was teaching these disciples the importance of obeying His Word even though they did not realize yet that it was His Word. 5 We learn from this verse that SUCCESS IN OUR RISEN LORD’S EYES DEPENDS ON FOLLOWING HIS WILL (JOHN 21:6). Only when the disciples obeyed Jesus were they successful in catching fish. What would have happened if the disciples had argued with the Stranger on the shore? What if they had said, “We have been fishing all night and have already tried that! We are the fishermen here, who are You?!” This miracle may not have taken place if the disciples had not been quick to respond to the Lord’s command.

God wants to teach us to trust Him even in areas where we have been strong in the past. Our risen Lord is reminding us that the problem when we don’t have success in our lives as believers is not our location, but who we are listening to.

Often times when I go fishing, the right spot to catch fish is usually located just beyond my reach.  If I am on the shore , I think to myself, “If I could just get my lure out in the middle of the lake, that is where the big fish are.” If I am in a boat out in the middle of the lake, I say to myself, “If I get close to shore that is where I will catch a huge fish.”

Jesus is teaching us that the disciples did not have to go somewhere else. They just needed to cast their net on the other side. It was listening to Christ that made the difference. It was trusting Jesus that made the difference. Sometimes when we are experiencing failure in our lives, we think it is because of our location. So we tell ourselves, “If I just moved, if I just changed locations it would make a difference.” There may be some wisdom in that at times. But before we start moving from place to place, try to find success by listening to Jesus first. He might want to give us success right where we are at. It is not where we are, it is who we are listening to that matters the most.

In conclusion, the better option for success in the risen Lord Jesus’ eyes has nothing to do with “trying harder” or “giving up.” It has to do with following Christ’s will. Peter and the other disciples were learning this valuable lesson. They tried on their own to catch fish all night with nothing to show for it. But when they heard Jesus’ command and obeyed it, they caught a net full of fish that was too big to haul into their boat.

Like the disciples, it takes humility for us to listen to the Lord in areas where we are strong. The most common way Christ gives us His advice is through the Bible. Let’s take time to listen to Him and do what He says.