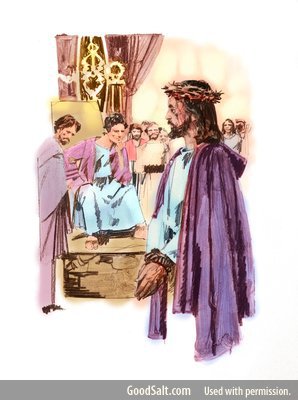 “But they cried out, ‘Away with Him, away with Him! Crucify Him!’ Pilate said to them, ‘Shall I crucify your King?’ The chief priests answered, ‘We have no king but Caesar!’ ” John 19:15

We are learning from John 19:4-42 that what happened to Jesus on the last day of His life also applies to us today. The apostle John has several images he wants to make sure that we see in the life of Jesus Christ. So far we have discovered that…

Today we see that THE CLOSER WE GET TO THE CROSS, THE MORE CLEARLY WE SEE WHO PEOPLE REALLY ARE, INCLUDING OURSELVES (John 19:13-16). When Pilate heard the religious leaders threaten to accuse him of treason if he did not bow to their wishes to put Jesus to death (John 19:12), Pilate “brought Jesus out and sat down in the judgment seat in a place that is called The Pavement, but in Hebrew, Gabbatha.” (John 19:13). ﻿The threat of losing his favored position with the Roman government was a key motivation for Pilate to crucify Jesus. Pilate took his seat on a raised platform known as the bēma (“judge’s seat”) at a place called “the Stone Pavement,” where a Roman official or governor would sit in judgment. 1  The meaning of the Aramaic term “Gabbatha” is uncertain. One suggested meaning is a “raised place,” referring to the platform from which Pilate spoke to the crowd (cf. Josephus Jewish Wars 2.175-176, 301, 308). 2

“Ironically Pilate then brings Jesus out to the judgment seat (bēma). One day Jesus will judge all unbelievers at the Great White Throne Judgment (Rev 20:11-15) and all believers at His Judgment Seat (Rom 14:10; 2 Cor 5:10). Yet this day He submits to judgment by a weak, arrogant unbeliever!” 3

“Now it was the Preparation Day of the Passover, and about the sixth hour. And he said to the Jews, ‘Behold your King!’ ” (John 19:14). Jesus, the innocent Passover Lamb of God “without blemish” (Exodus 12:5; John 1:29; I Corinthians 5:7; 2 Corinthians 5:21), was being presented by a pagan ruler to the nation of Israel on Friday the day before the Sabbath at “about the sixth hour” which was 6:00 A.M. according to the Roman method of reckoning time. 4

“When the Israelites were slaves in Egypt, God had commanded them to slaughter a lamb and place its blood on the doorposts of their homes. Then, when he struck down the firstborn of Egypt, he ‘passed over’ the homes with a blood covering. By means of this, God rescued his people from slavery (see Exod 12:1-28). Jesus, ‘the Lamb of God, who takes away the sin of the world’ (1:29) was about to shed his blood so that all those who believe in him would be saved from slavery to sin. His death at this particular moment wasn’t due to chance, then, but due to the sovereign timing of God.” 5

Once again, we see that God is the One Who is in control. Pilate was an instrument of God’s sovereign plan and purpose (cf. Acts 2:22-24). Even though Pilate seems to be taunting the Jews when he presents their beaten and bloodied Messiah (“Behold, your King!”), it is ironic that this corrupt political leader recognizes the truth that Jesus is their King.

But the Jews wanted nothing to do with King Jesus despite all the evidence that He was their promised Messiah-God. “But they cried out, ‘Away with Him, away with Him! Crucify Him!’ ” (John 19:15a). Again Pilate refers to Jesus as their King. “Pilate said to them, ‘Shall I crucify your King?’” (John 19:15b). And the Jewish leaders persisted in their rejection of Christ.  “The chief priests answered, ‘We have no king but Caesar!’ ” (John 19:15c). Really? They have no king but Caesar!?! ﻿

“Notice that they didn’t say, ‘We have no king but God.’ Their hatred of Jesus was so great that they were willing to disregard their divine ruler and align themselves with a pagan king. Placing human government above God never ends well.” 6

Just ask the Israelites when they rejected God as their ruler and demanded a human king similar to the surrounding pagan nations during the time of the prophet Samuel (I Samuel 8:4-8). Although their demand arose out of frustration over the corruption of Samuel’s sons (I Samuel 8:1-3), the better choice would have been to remove Samuel’s sons from leadership and choose qualified men to take their place. But they refused to do this even though God warned the nation of Israel of the destructive things a human king would do to them (I Samuel 8:9-20).

﻿What happened in Samuel’s day and in Jesus’ day, is also happening today. When God is dismissed from the family, people often turn to the government to fix their problems instead of turning to God. People are wanting the government to manage their affairs instead of submitting to God’s rule in their families and individual lives. ﻿When “civil government reaches into the other spheres that God has instituted—things like the family or the church—government grows far beyond its divinely authorized scope. This allows government to both confiscate and redistribute what should not be moved. That is exactly what God warned Israel against in 8:10-18 as they insisted on having a human king.” 7

Although the nation of Israel’s rightful King, a Descendant of king David, stood before them, they chose a pagan king when they said, “We have no king but Caesar!” (John 19:15c). Pilate then gave in to their demand and “delivered Him to them to be crucified. Then they took Jesus and led Him away.” (John 19:16). If you were Pilate, how would you explain to your wife that night why you finally let Jesus be killed? Remember she had told Pilate earlier, “Have nothing to do with that just Man, for I have suffered many things today in a dream because of Him.” (Matthew 27:19).

“The time had now come for the Lamb of God to take away the sin of the world and make people savable (John 1:29). He would be crucified and after six hours would breathe His last in His non-glorified body.” 8

Jesus had known what was going to happen for days, weeks, months – eternity past. And now on this Stone Pavement, Pilate says, “I am innocent of the blood of this just Person. You see to it.” (Matthew 27:24). It is at this time,Jesus hears the words, “You are going to be crucified.”

It is amazing what happens when Jesus is on trial before the religious leaders and Pilate. Pilate stands before the crowd and tries with all of his might to appear fair and just as a political leader. But when we look at him in this scene that John presents to us, does he look fair? Does he look like a man of justice? No, he looks like a self-serving political coward who yields to the demands of the majority!

But are we any different than Pilate? Have we ever made a decision based on fear or ambition? Have we ever refused to do the right thing because of the cost involved? If we are honest with ourselves, the answer is “Yes!” The cross exposes this in our lives.

If you look at the chief priests and temple officers there at the same place, they try to appear holy and righteous. They would not even go into the Gentile palace area so they could avoid ceremonial defilement (John 18:28). They wanted to be holy for the day of Passover. But do they look holy and righteous, rejecting their rightful King? Not at all!

And yet we can also be like these religious leaders. We compare ourselves to others and conclude that we look pretty devoted to our religion compared to the way others look. We go to a place of worship every week while others spend more time in jail. We pray and read our sacred literature every day while others curse and read filth online.

But compared to the innocent Lamb of God, we are very dark and wicked on the inside. We think more of ourselves than others. But Jesus continued to think of others even while hanging on the cross (John 19:25-27). We hold grudges against those who have hurt us, but Jesus forgave His enemies while He hung on the cross (Luke 23:34). We are quick to condemn criminals, but Jesus lovingly offers them hope (Luke 23:42-43).

When we compare ourselves to the people around us, we might think we are pretty good. But when we start to look at our lives in light of the cross of Jesus Christ, we recognize our great need for Him. And we also recognize His great love for us (Romans 5:8). This is why we need the cross in our lives. So we can see who we really are and Who Jesus really is. Jesus said it best: “For there is nothing covered that will not be revealed, and hidden that will not be known.” (Matthew 10:26b). So why not make it known between you and the Lord right now? 9  He is patiently waiting.

Prayer: Oh heavenly Father, thank You for the light of the cross of Your Son, Jesus Christ, which exposes the darkness in our own hearts.Like Pilate, we can easily make hurtful decisions based upon fear or ambition, and yet our stubborn pride wants to deny this. Thank You for lovingly showing us this today. As difficult as it is to admit, we can also be like the religious leaders who thought they looked pretty good compared to the way they thought others looked. But compared to their King, they were self-righteous and unholy, rejecting Jesus as their rightful Ruler. Likewise, we often want to control our own lives instead of yielding to Your rightful rule over us. Oh Lord Jesus, thank You for showing us how much we need the cross and how much we need You and Your love for us. None of us are close to perfect. All of us have sinned against You and fall short of Your glory. None of us deserve the love You have for us. But all of us need Your love. All of us need the cross whether we admit it or not. We need the forgiveness, the cleansing, and the power and strength that the cross provides so we can change and become more like Your Son. Thank You, our Lord and our God, for Your amazing grace. In the redeeming name of the Lord Jesus Christ we pray. Amen.

9. The last several paragraphs are adapted from Tom Holladay’s July 24, 1996 message entitled, “A Day in the Life of…  Jesus Christ.”