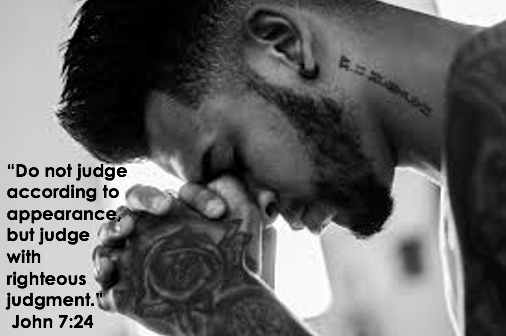 “Do not judge according to appearance, but judge with righteous judgment.” John 7:24

The final way to stay focused on what is important to God is to ATTEND TO RELATIONSHIPS MORE THAN RULES (John 7:24). Jesus said to His Jewish audience in the temple, “Do not judge according to appearance, but judge with righteous judgment.” (John 7:24). Christ doesn’t confront His listeners for judging His actions. He confronts the basis on which they judge His actions. “Stop judging people according to your superficial, legalistic rules. Instead judge according to what is right, according to the biblical facts. Nowhere does the Bible forbid healing on the Sabbath. So don’t take a superficial view of what I did when the lame man was healed and took up his bed and went home, but take a right view of the lame man who was mercifully healed and could walk again. Show more concern for relationships instead of your rules. Focus more on meeting the needs of people instead of yourselves,” Jesus says.

Christian author, Charlie Bing, writes, “Legalism is the abuse of grace that seeks to bring Christians either back under the Mosaic law or [under] some artificial standard for acceptance with God that has been created by others. The legalist insists on following a list of do’s and don’ts …. Legalistic Christians can easily fall under the expectations of others that make them feel guilty falsely. For example, they can be made to feel that they are not spiritual because of what Bible translation they use, how they dress, what they eat or don’t eat, what movies they see, what music they listen to, what church meetings they do or don’t attend—or any other issue which the Bible does not address directly.

“What the legalist fails to realize is that Jesus not only set us free from the Old Testament law (Rom. 6:14; 7:4-6; Gal. 3:13; 4:4-7) but He also set us free from artificial man-made standards that are not in the Bible. We are accepted by God because we are His children by grace (Gal. 4:7). We stand accepted by grace (Rom. 5:1-2) and are thus secured by His grace until the time that we see Him (Rom. 8:29-39). Since every believer is accepted on the basis of grace we should accept other believers who differ on issues not clearly defined as right or wrong in the Bible (Romans 14).” (from http://www.gracelife.org/resources/ gracenotes.asp?id=12).

We need to look at life from God’s point of view, so that what He values is what we value, and we can make decisions that are in line with His. God doesn’t just smile at the old hymns; He also smiles on country… classical… Christian rock and rap music. We can approach God with just as much confidence in cut offs or blue jeans as we can in a suit and tie. God is more concerned about our hearts than our hair, our character more than our clothes, our motives more than our music, our disposition more than our decorations.

Chuck Swindoll writes in his book, The Grace Awakening, “One of my favorite stories comes from a man who used to be in our church. He and his wife were close friends of our family, but they have now moved to another part of the country. We really miss their joyful presence.

“When he was a youth worker many years ago in an ethnic community, he attended a church that had Scandinavian roots. Being a rather forward-looking and creative young man, he decided he would show the youth group a missionary film. We’re talking simple, safe, black-and-white religious-oriented movie. That film projector hadn’t been off an hour before a group of the leaders in the church called him in and asked him about what he had done. They asked, ‘Did you show the young people a film?’ In all honesty he responded, ‘Well, yeah, I did.’ ‘We don’t like that,’ they replied. Without trying to be argumentative, the youth worker reasoned, ‘Well, I remember that at the last missionary conference, our church showed slides-’

“One of the church officers put his hand up signaling him to cease talking. Then, in these words, he emphatically explained the conflict: ‘If it’s still, fine. If it moves, sin! You can show slides, but when they start moving’, you’re gettin’ into sin.’ ”

That church had lost sight of what is really important. This can happen to us as well in our Christian lives. When we lose sight of what God values we become more intolerant and prevent honest seekers from approaching God. We can stifle believers from growing in God’s grace. Love gets replaced by a long mental checklist so that the joy of friendship is fractured by judgmental attitudes. As a result, mere differences become right or wrong issues. So instead of the length of your hair or the type of music you like being just a difference, it suddenly becomes a right or wrong issue… a measure of spirituality.

May God help us to major on the majors… to focus on what’s really important to Him. May we be people who…

ASCERTAIN God’s Will By Doing It

ASSESS Those Who Teach US

ATTEND To Relationships More Than Rules

During this season of challenges, let’s focus on the Gift that matters most – the One Who gave His life so that those who believe in Him may have life that never ends!

Prayer: Father God, thank You for the gift of Your Son who offers everlasting life freely to those who trust in Him alone. Teach us to be more like Him by majoring on the majors. Forgive us for our misplaced priorities, and enable us to focus on the One who died in our place and rose from the dead. Keep us trusting Your word, understanding it, and seeking to obey it that we might focus our lives around what is most important to You – a living relationship with Jesus Christ and other people. We ask this in Jesus’ name. Amen.