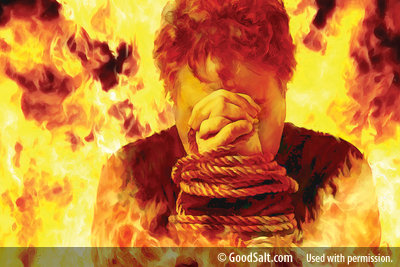 “But these things I have told you, that when the time comes, you may remember that I told you of them. And these things I did not say to you at the beginning, because I was with you.” John 16:4

– Recognize that the world is not opposed to us personally, but to our relationship with Christ (John 15:21-25).

The fifth and final way is to REMEMBER THAT JESUS IS STILL IN CONTROL (John 16:1-4). Christ said to His disciples, “These things I have spoken to you, that you should not be made to stumble.” (John 16:1). This message about the hatred of the world was not meant to discourage Jesus’ disciples or dissuade them from the ministry. He told them what to expect from the world so they “should not be made to stumble” or fall away from their Christian faith. The word picture here is of someone stumbling over an unexpected obstacle. 1  Jesus was warning His disciples (and us) of the obstacles ahead so they would not be taken by surprise and overcome by worldly opposition. We do a disservice by telling people that discipleship is easy. Jesus never taught that, and neither should we. He said discipleship is costly (cf. Luke 14:26-33). It will be difficult. How difficult would it be for them (and us)?

He describes specific ways that the world will hate them. “They will put you out of the synagogues; yes, the time is coming that whoever kills you will think that he offers God service.” (John 16:2). When Jesus says, “They will put you out of the synagogues,” He is saying they will lose every privilege they had as a citizen of Israel. They would be excluded from using the temple for worship. They would be excluded from the society in which they had moved. They would lose the privilege of employment in their nation. They would be deprived of schools to which they could send their children. In effect, they would be reduced to poverty. Some would even be killed, and their killers would think they were providing a faithful “service” to God. According to church tradition, all the apostles were martyred for their faith except for John. 2

Christ is not talking about persecution by the secular government here. He is speaking of persecution by religious zealots. No persecution is more bitter than when done by religious enthusiasts like the Spanish Inquisition, set up in 1478. It sought to eliminate heretics and killed up to 5,000 people. 3

From 1095-1492, violent crusades against Muslims took place in Europe, Asia, and Palestine along with severe persecution by the Roman Church of those who differed with it. 4  The Roman Inquisition, 1542-1858, originally sought to deal with the spread of Protestantism. Those who differed with the Roman Church were tortured until they confessed and recanted. If they did not confess and recant, they would lose their property, freedom, or be burned at the stake. 5

The Ku Klux Klan (KKK) reorganized in 1915 and in addition to hating blacks, it hated Catholics, Jews, and  it opposed Jews, blacks, Catholics, and newly arriving Southern and Eastern European immigrants, many of whom were Jewish or Catholic. The Klan claimed to be explicitly Protestant. Although it appropriated some Christian teaching, hymns, and symbols, it was widely denounced by Christian denominations. 6

It is important to understand that the persecutors mentioned above do not represent biblical Christianity. Just because someone says they are a Christian or does something in the name of Jesus does not mean they are genuine believers in Jesus.

The Bible emphasizes that eternal life is a free gift (John 4:10-14; Romans 6:23; Ephesians 2:8-9). A person does not receive eternal life by living a good life, keeping God’s commandments, going to church, praying every day, being baptized with water, or hating their enemies. The Bible tells us that a person must come to God as a sinner (Romans 3:23), realizing that Christ died for all his sins and rose from the dead (I Corinthians 15:3-6), and then believe or trust in Christ alone for His gift of everlasting life (John 3:36; 6:40, 47; I Corinthians 15:3-6). The moment a person trusts in Christ alone to give them everlasting life, God not only gives him or her the free gift He paid for when He died on the cross – eternal life – He also comes to live inside of that person through His Holy Spirit (Romans 8:11; Galatians 2:20; 3:2) to give them the power to live a life that pleases Him.

Many people who claim to be Christians do not understand this simple gospel message. Instead of trusting in Christ alone to get them to heaven, they are trusting in their good works or in Christ plus their good works to get them to heaven, and therefore, they do not have God’s power in them to live a life that pleases Him. Many non-Christians use their religion to try to cover up their sins. So it is important to understand that not all people who say they are Christians have God’s power in them to live a different life because they are not trusting in Christ alone to save them and give them everlasting life. Instead, they are depending on their good works or religious efforts to get them to heaven, instead of on Christ and His finished work on the cross alone.

Modern day examples of persecution by misguided zealots include militant Muslims persecuting innocent Christians in the Middle East and Africa, and militant Hindus attacking Christians in India, etc. Since the time of Christ, the most severe persecution of Christians has come from religious enthusiasts who think they are serving their god or gods.

Next Christ said to His disciples, “And these things they will do to you because they have not known the Father nor Me.” (John 16:3). The reason the world will persecute Jesus’ followers is because it is spiritually ignorant of God the Father and God the Son. Opposition to God’s messengers really meant opposition to God Himself.

Jesus then said, “But these things I have told you, that when the time comes, you may remember that I told you of them. And these things I did not say to you at the beginning, because I was with you.” (John 16:4). Jesus warned His disciples about this coming persecution to strengthen their faith. Even on the night before His crucifixion, He is concerned for these men and their future. Jesus’ knowledge about their future would give them more confidence in His ability to control events. Christ did not tell His disciples “these things” about their coming persecution “at the beginning” of His ministry when He was with them, because He was the object of attack from the world at that time. But now that He is leaving them to go be with His Father in heaven, He forewarns them. They would know He was in control when trials would come because He had said they would.

We see in the book of Acts that Jesus’ words emboldened the apostles to continue preaching Christ in the midst of persecution. For example, when the apostles disobeyed the Sanhedrin’s order to stop preaching Jesus, they were beaten and commanded once again to speak no more in Jesus’ name. Luke reports, “So they departed from the presence of the council, rejoicing that they were counted worthy to suffer shame for His name. And daily in the temple, and in every house, they did not cease teaching and preaching Jesus as the Christ” (Acts 5:41-42). They were not taken by surprise when the Sanhedrin opposed them because Jesus forewarned them of this. Jesus really is in control.

Do you think Jesus’ control over us is total or partial? Listen to Daniel 4:35: “He does according to His will in the army of heaven and among the inhabitants of the earth. No one can restrain His hand or say to Him, ‘What have You done?’ ” Accept it or not, God is in total control. He is running the show. Either He is in full control or He is off the throne. It is as foolish to say He is “almost” in control as it would be to say I am “almost” married or Trump is “almost” President, or the surgeon’s gloves are “almost” sterile. God is totally in control. The more we believe this, the more confidence we will have to be an effective witness for Christ in a hostile world.

﻿Jesus wanted His disciples and us to be prepared for what is coming. We should not be overtaken by surprise when we experience some form of rejection or censure for our Christian beliefs and standards because Christ forewarned us of such opposition. This hostility can come from family, friends, employers, customers, coworkers, the government, and especially from religious zealots. ﻿As Paul warned Timothy, “All who want to live a godly life in Christ Jesus will be persecuted.” (2 Timothy 3:12). But the Holy Spirit is always available to empower us in our time of need (John 15:26-27). 7

Prayer: Lord Jesus, You are an amazing God! Thank You for warning me about the hostility of the world so that when I do experience it, I can be encouraged to know that You are in control and I can trust You to accomplish Your purposes in my life. Please embolden me to share Your gospel message unashamedly with this broken and hostile world. Thank You for Your Holy Spirit Who can empower me to face this opposition with grace and truth. I surrender everyone and everything to You, my Lord and my God. In Your mighty name I pray, Lord Jesus.  Amen.