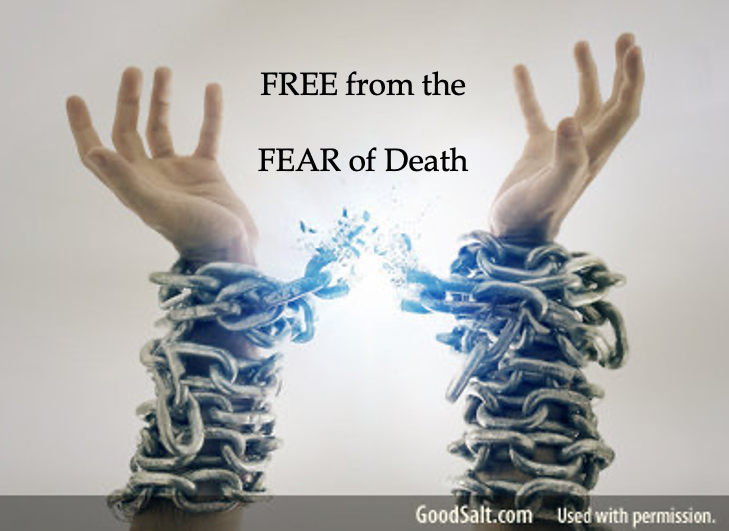 “14 Inasmuch then as the children have partaken of flesh and blood, He Himself likewise shared in the same, that through death He might destroy him who had the power of death, that is, the devil, 15 and release those who through fear of death were all their lifetime subject to bondage.” Hebrews 2:14-15

We are living in a world that is becoming more fragile due to COVID, the war between Russia and Ukraine, terrorism, and cancer to name a few reasons. These factors (and others) are causing more people to think about death.

Often death takes place much sooner than most people anticipate whether it is due to an accident, a mass murderer, or a terminal illness. As tragic as these things are, death and dying are not God’s idea. The Bible tells us that “the devil… had the power of death” (Hebrews 2:14b) because he tempts people to sin, and sin brings forth death (Genesis 3:1-19; Romans 5:12; James 1:15). 1

The good news is that Jesus Christ became like us (“inasmuch then as the children have partaken of flesh and blood, He Himself likewise shared in the same”) so He could conquer death with His own death on the cross. Christ took the punishment we deserved for our sins (death) and died in our place. Three days later, Jesus rose from the dead victorious over death so “He might destroy him who had the power of death, that is, the devil.” “Through” His “death,” Jesus conquered death to “release” people who believe in Him from the “fear of death.”

Christ promised, “He who believes in Me, though he may die, he shall live. And whoever lives and believes in Me shall never die.” (John 11:25-26). Jesus guarantees a person who believes in Him that “though he may die” physically, “he shall live” eternally with Him. Yes, our breath stops, and our bodies become cold. But the Bible promises that “to be absent from the body” is “to be present with the Lord” (2 Corinthians 5:8). Therefore, all who believe in Christ never need to be afraid of death because He promises “never” ending life to them. The moment we die we are in the presence of the Lord.

Evangelist Larry Moyer writes, “I found out that the pilot of the plane that was flown into the second tower of the World Trade Center on September 11, 2001, was a believer in Jesus Christ. I am here to tell you; the terrorists did not defeat him. He defeated the terrorists. Because he did not go down, he went up.” 3

If you had died in that plane crash, would you have gone down or up? You can know for sure you will go up by believing in Christ alone to take you to heaven when you die. Jesus is not asking you to be baptized, go to church, live a good life, keep the Ten Commandments, take all the sacraments, or pray everyday. He is simply asking you to believe in Him for His gift of everlasting life. The moment you do, you can see death as a new adventure rather than your greatest fear.

Prayer: Lord Jesus, thank You for becoming human like us so You could defeat the devil and his power of death through Your own death so those who believe in You can be released from the fear of death. Please lead us to those who are afraid to die so we can share the good news of Your never-ending life to all who believe in You and You alone. Thank You for the simplicity of the gospel that delivers people from their greatest fear. In Your matchless name we pray, Lord Jesus. Amen.

1. Adapted from Dr. Larry Moyer’s sermon, “Four Things A Loving God Wants Us To Know About Death and Dying,” contributed on August 5, 2009, at sermoncentral.com.