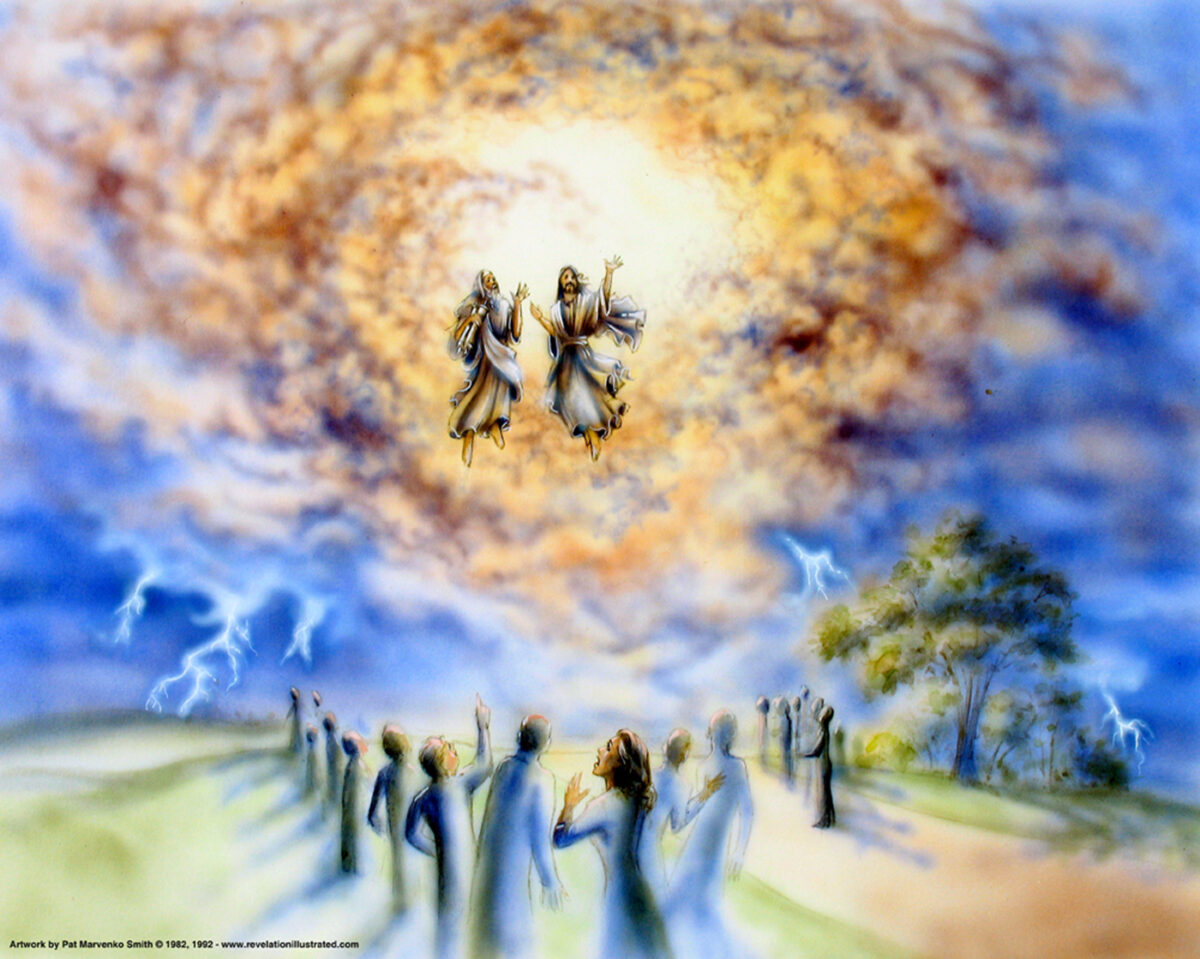 “And they heard a loud voice from heaven saying to them, ‘Come up here.’ And they ascended to heaven in a cloud, and their enemies saw them.” Revelation 11:12

We saw last time that through two witnesses God brings directly to faith in Christ, He will proclaim the gospel of the kingdom during the first half of the Tribulation period, resulting in the salvation of the 144,000 Jewish evangelists who will then evangelize all the nations during the last half of the Tribulation period (Revelation 11:1-6; cf. 7:1-17; Matthew 24:14). These two end-time prophets empowered by God’s Spirit will seem to be untouchable and unstoppable even though their enemies will hate them because of the judgments they bring upon the earth (11:5-6). But like other servants of the Lord, when God says, “Mission accomplished,” He removes His protection from them and permits their enemies to kill them. 1

It is interesting to discover that the Greek word translated “testimony” (11:7),is martyrian, which has the same root as our English word “martyrdom.” Swindoll writes, “Originally, to be a martyr meant to give public testimony about the truth, but that public witness could lead to the sealing of that testimony with death. Thus, these two ‘martyrs’ of the future will follow their Savior and countless saints before them in the path of martyrdom for the sake of the gospel of Jesus Christ.” 4

Only “the beast” or Antichrist will be able to stop these two witnesses. At the middle of the seven-year Tribulation (Daniel 9:27; Matthew 24:15), he will become the world’s dictator and “will make war against them, overcome them, and kill them” (11:7; cf. 13:1-10). His power overrules the power of these two witnesses—but only temporarily. 5

﻿It is important for us to remember that just like these two witnesses, our times are in God’s hand as well (cf. Psalm 31:14-15). We, too, are invincible until the Lord is finished with us, and we have completed our work for Him on earth. What a comforting, strengthening truth this is amid a dark and devastating world. 6

We see the world’s contempt for these two prophets in their response to their deaths. “8 And their dead bodies will lie in the street of the great city which spiritually is called Sodom and Egypt, where also our Lord was crucified. 9 Then those from the peoples, tribes, tongues, and nations will see their dead bodies three-and-a-half days, and not allow their dead bodies to be put into graves.” (Revelation 11:8-9). The beast will add insult to injury by allowing the “dead bodies” of the two witnesses to “lie in the street” of Jerusalem where the “Lord” Jesus “was crucified” (11:8). To leave a corpse unburied was the worst indignity that someone could perpetrate on a person in biblical times (cf. Psalm 79:2-3). 7 “Spiritually” Jerusalem was “called Sodom” ﻿because of its pride and iniquity (cf. Genesis 13:13; ﻿Ezekiel 16:49) and “Egypt” because of its oppression of God’s people (cf. Exodus 3:7; 20:2). 8

Some “peoples, tribes, tongues, and nations” will not allow the two witnesses to be buried, viewing their corpses for “three-and-a-half days” (11:9). Just as individuals from “all nations, tribes, peoples, and tongues” will be saved by the blood of the Lamb (7:9), some from every ethnic group will also harden their hearts against God. The beast will engineer all this activity to show he is superior in power to God’s two witnesses and to the God they serve. 9

This viewing of the witnesses’ dead bodies by every ethnic group implies some worldwide display, now made possible by modern technology. 10 Television and satellite communications make this scene seem even more plausible today.

Mark Hitchcock writes, “It means their bodies will be seen simultaneously by people all over the world. If this is correct, it means that John saw something that has only become possible in the last sixty years, almost two thousand years since he predicted it.

“At the time this prophecy was given, and for centuries after, the scope of such a prediction would have seemed impossible. Yet today it’s commonplace. It happens 24/7 every day on cable news all around the world, even in many poor Third World countries.” 11

“As Tim LaHaye says, ‘Ours is the first generation that can literally see the fulfillment of 11:9 in allowing people of the entire world to see such an awesome spectacle. This is one more indication that we are coming closer to the end of the age, because it would have been humanly impossible just a few years ago for the entire world to see these two witnesses in the streets at a given moment of time.’” 12

Hitchcock quotes Ray Stedman, “They keep telling the truth to people who want only to embrace ﻿their delusions. They keep blunting the Antichrist’s carefully concocted propaganda. . . . The vile and godless society of the world under the Antichrist takes the death of the two witnesses as a cause for global celebration. One is reminded of a saying that was common among ancient Roman generals, ‘The corpse of an enemy always smells sweet!’” 14

“﻿People all over the world will be so ecstatic these witnesses for God are dead that they will hold a Christmas-like celebration and send gifts to one another—Satan’s Anti-Christmas. This is the only mention of any kind of rejoicing or celebrating on earth during the entire Tribulation period. People will be so thrilled to see these men dead that no burial will be allowed. They will want to watch their bodies rot in the street.” 15

This worldwide celebration of the two witnesses’ deaths will not last long. “Now after the three-and-a-half days the breath of life from God entered them, and they stood on their feet, and great fear fell on those who saw them.” (Revelation 11:11). John tells us,“After the three-and-a-half days the breath of… God” resurrected the two witnesses causing “great fear to fall on those who saw them.” The two dead bodies that “stood on their feet” will “terrify these onlookers, because these gawking God-haters will be able to do no more to silence their enemies beyond killing them. The use of the prophetic present tense in the verbs in this verse pictures what is future as fact.” 16

“﻿Picture the scene—the sun-drenched streets of Jerusalem, the holiday crowd flown in from the ends of the earth for a firsthand look at the corpses of these detested men, the troops in the Beast’s uniform, the temple police. There they are, devilish men from every kingdom ﻿under heaven, come to dance and feast at the triumph of the Beast. And then it happens! As the crowds strain at the police cordon to peer curiously at the two dead bodies, there comes a sudden change. Their color changes from cadaverous hue to the blooming, rosy glow of youth. Those stiff, stark limbs—they bend, they move! Oh, what a sight! They rise! The crowds fall back, break, and form again.” 17

As these mockers look on with fear, “They heard a loud voice from heaven saying to them, ‘Come up here.’ And they ascended to heaven in a cloud, and their enemies saw them.” (Revelation 11:12). ﻿Before these God-haters are even able to process all that they are observing, they hear “a loud voice from heaven.” ﻿The beast’s bragging will be silenced by God’s voice calling, “Come up here.” At that, the witnesses will be taken up in a cloud while “their enemies” watch. 18 Just as Christ was raised from the dead and ascended in a cloud (cf. Acts 1:9), so these two witnesses will ascend to heaven in a cloud and will be seen by “their enemies.” Their glorious ascension is also like that of Elijah (2 Kings 2:11), and Christians at the Rapture (1 Thessalonians 4:17). 19

This is a quite a scene. People all over the world will see the two witnesses caught up to heaven on their favorite TV newscast as the analysts will sit around discussing its significance. 20

Shortly after the ascension of the two witnesses, God’s judgment fell upon the city of Jerusalem. “In the same hour there was a great earthquake, and a tenth of the city fell. In the earthquake seven thousand people were killed, and the rest were afraid and gave glory to the God of heaven.” (Revelation 11:13). ﻿A “tenth” of Jerusalem’s buildings are destroyed as “a great earthquake” rips through the city, and kills “seven thousand people.” The people in Jerusalem who survive the earthquake become “afraid” and give “glory to the God of heaven.” ﻿As God often does, in this instance He will allow catastrophic events to occur because those events will bring Him greater glory. 21

The great Jerusalem earthquake following the ascension of the two prophets will bring a close to the interlude between the sixth and seventh trumpet judgments. “The second woe is past. Behold, the third woe is coming quickly.” (Revelation 11:14). The “second woe” or sixth trumpet judgment announced in 8:13 had come to pass, leaving only the “third woe” or final trumpet judgment, to come “quickly.” 23

The account of the two witnesses in Revelation 11:1-14 encourages us to remember that no matter how dark things may be, the Lord never leaves Himself without a witness. Paul Benware offers this comforting insight about the life and ministry of the two witnesses: 24

“These two miracle-working servants of God are lights for the Lord in the morally and spiritually dark city of Jerusalem. The two witnesses are a reminder that even in the worst of times God does not leave Himself without witnesses.” 25

When I observe people mocking God and His servants today, I often complain about the lack of Christian influence in the world. But God is convicting me to be His witness in the darkness. This is the challenge from Revelation 11:1-14 to all of us who know the Lord Jesus Christ as our Savior. God wants to use each of us regardless of our past or our weaknesses. One day He will send His two witnesses to proclaim His life-giving message to a wicked world. But for now, God has sent those of us who believe in Jesus to announce the truth about the risen and ascended Christ to a world that is reeling in the darkness of deception.

Prayer: Lord God Almighty, we thank You for this amazing account of the two witnesses who were permitted to be killed by the Antichrist only after they had finished their prophetic ministry to the world. What a great reminder that no one can touch us until we have completed the work You have given us here on earth. And just as the death of the two witnesses was not final, nor will ours be. You raised them from the dead so they could ascend to heaven, and You will also triumphantly raise up believers who have died to be caught up together with those believers who remain alive to meet our Lord Jesus in the air when He returns for His church prior to the horrific judgments of the Tribulation (I Thessalonians 1:10; 4:13-18). Thank You for promising us triumph after tragedy. Please enable us to proclaim your life-giving gospel message with all boldness and faithfulness so more people can be translated into Your presence the moment You tell us to “Come up here.” In the name of the ascended Lord Jesus Christ, we pray. Amen.