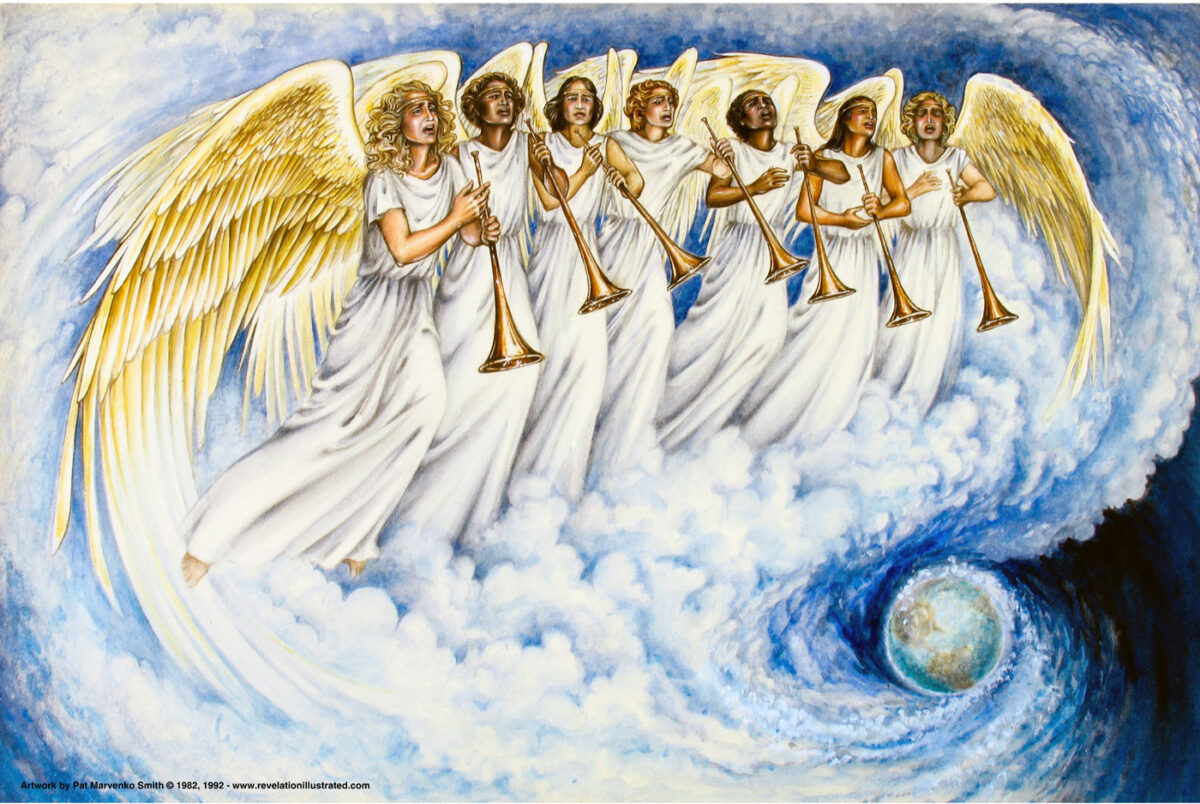 “And I saw the seven angels who stand before God, and to them were given seven trumpets.” Revelation 8:2

Following the opening of the seventh seal resulting in silence in heaven for about half an hour (8:1), ﻿John describes what is happening around the throne of God (8:2-6), giving heaven’s perspective on the next series of judgments about to take place on the earth. In this introduction the prayers of the saints play a key role in the launch of the trumpet judgments. 1

The word “trumpets” (salpinges) “refers to an instrument of pronouncement, alarm, or call to arms. The New Testament never uses this term to identify a musical instrument. Instead, it refers to its military use, similar to a bugle used on a battlefield. In Revelation, as in several Old Testament passages (Isaiah 27:13; Joel 2:1), the trumpet announces the coming of the day of the Lord.” 3

In these verses, the “trumpets” are used to announce divine judgment(s) in the day of the Lord (cf. Zechariah 1:14-16). They declare war against rebellious mankind on the earth. 4 ﻿

“To draw the eyes, ears, minds, and hearts of the world to God, heavenly angels will sound a series of trumpets—unmistakable signs of God’s ﻿power over the earth. For some the sounds serve as calls to redemption, but for most they will become terrifying reminders of wrath.” 5

“Then another angel, having a golden censer, came and stood at the altar. He was given much incense, that he should offer it with the prayers of all the saints upon the golden altar which was before the throne.” (Revelation 8:3). ﻿During these thirty minutes of reverent silence in heaven, “another angel” acting as priest approached the “altar” holding “a golden censer of incense.”  This saucer-shaped bowl was used in temple worship to hold burning incense, “an aromatic substance made of gums and spices.” 6

﻿ ﻿“In the Old Testament tabernacle a censer made of copper, probably heavy to handle, was ﻿used to carry coals from the brazen altar outside the tabernacle to the altar of incense inside. Later, in the temple, Solomon used censers made of gold (1 Kings 7:50; 2 Chronicles 4:22).

“This offering in heaven corresponds to the custom of offering incense on the altar of incense in both the tabernacle and the temple. The censer would hold the coals, and a separate vessel would carry the incense which was to be poured on the coals once the altar was reached. The resulting smoke was typical of prayer ascending before God.” 7

This angel fills the role ﻿of priestly mediator like the Old Testament priest (cf. 2 Chronicles 26:18) and adds an element of sanctity and holiness that is pleasing to God (cf. Romans 8:34; Hebrews 7:25). He reveals that the impending trumpet judgments arise from God’s holy justice and are sent in response to the numerous prayers of godly people in all ages who have prayed for judgment and justice to come on the earth (cf. Matthew 6:10). 8

The offering of incense may also symbolize the earlier impatient prayers of the martyred saints from the Tribulation who cried out to God, “How long, O Lord, holy and true, until You judge and avenge our blood on those who dwell on the earth?” (Revelation 6:10). Many of us have been taught that there are three possible answers from God in response to our prayers: “yes,” “no,” or “wait.” In this instance, we see that unanswered prayers are sometimes stored up until God chooses to answer them in His perfect timing and way. 9

“No saint’s prayer is forgotten, but has its effect in due season, in bringing in the Kingdom, that is, our Lord’s return!

“It is the answer at last to ‘Thy Kingdom come’ which the saints of all ages have prayed. No other answer could be given, inasmuch as earth has rejected the rightful King!” 10

“Then the angel took the censer, filled it with fire from the altar, and threw it to the earth. And there were noises, thunderings, lightnings, and an earthquake.” (Revelation 8:5). ﻿“The censer,” previously filled with prayer, is now “filled… with fire from the altar” and is cast to the earth. The ensuing “noises, thunderings, lightnings, and an earthquake” are reminiscent of how God manifested His power and presence ﻿at Mount Sinai (Exodus 19:16-19; Psalm 68:8) and are a forewarning of how God will reveal His power and presence through the trumpet judgments. 12

The time has finally come for God to answer the desperate pleas for justice from His people throughout all the ages. I am reminded of what the Lord said in Deuteronomy 32:35-36: “’35 Vengeance is Mine, and recompense; their foot shall slip in due time; for the day of their calamity is at hand, and the things to come hasten upon them.’ 36 For the Lord will judge His people and have compassion on His servants, when He sees that their power is gone, and there is no one remaining, bond or free.”

﻿“What a potent force is prayer! The saints go into their bedrooms, close the doors, kneel down, and pray. They spread out before God their petitions, and God hears. The prayers are placed in the scales of judgment.” 13

“So the seven angels who had the seven trumpets prepared themselves to sound.” (Revelation 8:6). It is now time for God’s trumpet judgments to begin. “In the heavenly order of things the greatest honour is to be ever ready to be sent on the service of God; and that is the honour these angels possessed.” 14

All the trumpet judgments proceed out of the seventh seal judgment (Revelation 8:1ff). When the Lamb broke the seventh seal, John saw not just one judgment but a whole new series of judgments. There is every reason to conclude that these will follow chronologically. 15

The trumpet and bowl judgments are the ones that the angel from the east held back until the 144,000 servants of God were sealed on their foreheads (7:3). Therefore, they are more severe than the first six seal judgments. The purpose of these subsequent judgments is to lead hostile unbelievers to repentance, and to announce punitive judgments against hardened unbelievers—but few will repent (cf. Revelation 9:20-21). 17

The coming catastrophic judgments of God during the second half of the Tribulation period are in response to the prayers of God’s people who have prayed for Him to avenge their sufferings (8:1-6). Rather than take vengeance into our own hands when we have been wronged by others, it is best to forgive those who have hurt us and let the Lord deal with them in His time and in His way.

All of us have been hurt and wounded by others, especially those we trusted. From beginning to end, the Bible emphasizes the importance of forgiveness. God even commands us to forgive: “And be kind to one another, tenderhearted, forgiving one another, even as God in Christ forgave you.” (Ephesians 4:32).

Jesus taught us to pray, “12 And forgive us our debts, as we forgive our debtors… 14 For if you forgive men their trespasses, your heavenly Father will also forgive you. 15 But if you do not forgive men their trespasses, neither will your Father forgive your trespasses.” (Matthew 6:12, 14-15). Forgiveness is so important because it is connected to God’s forgiveness of us. I cannot enjoy fellowship or closeness with God the Father if I am not willing to forgive those who have hurt me. Being unforgiving connects us to our past hurts and makes it difficult to fully enjoy the blessings of our relationship with God and with other people in the present.

One of the ways we can know we have not forgiven someone is we keep rehearsing bitter and defensive thoughts toward those who have hurt us. We keep going “back to court” in our minds with all the things we wish we had said or want to say to them. 18 God invites us to release the hurt others have caused to us. Forgiveness requires the cancelling of a debt (cf. Matthew 18:21-35). Perhaps the person who has hurt us owes us an apology, justice, money, repentance, restoration, suffering, understanding, etc. God wants us to cancel the debt they owe us.

We may tell ourselves, “If I forgive them, they will get off the hook and there will never be any justice.” But the truth is, only God knows what is just. The Bible says, “17 Repay no one evil for evil. Have regard for good things in the sight of all men. 18 If it is possible, as much as depends on you, live peaceably with all men. 19 Beloved do not avenge yourselves, but rather give place to wrath; for it is written, ‘Vengeance is Mine, I will repay,’ says the Lord.” (Romans 12:17-19). God wants us to do our part to get along with people and live at peace with them. But if they still hold on to a grudge or mistreat us, God says He will deal with them.

There have been many barbaric things done to believers in Jesus throughout the ages. Recently, “The Taliban has been going door to door looking for Christians to kill and unmarried women to take captive. Christians in Afghanistan fear the same genocidal persecution suffered by fellow Christians in Iraq and Syria.

“Christians are hiding in their homes in Afghanistan for fear of what the Taliban will do to them.” 19

Today’s verses remind us that the day is coming when God will respond to the pleas of His people for justice. The horrific trumpet judgments during the last half of the Tribulation will be God’s answer to His peoples’ cries.

Prayer: Father God, what a privilege for us to see what is happening in Your throne room prior to the trumpet judgments on the earth. The fact that the prayers of the saints rise with sweet smelling incense tells us it is a pleasant experience for You to receive the prayers of Your people. Thank You for reminding us not to try to take vengeance into our own hands when we have been wronged by others. For You will respond one day to the accumulative pleas of Your people for justice. And You will repay those who have brought so much pain to Your people. It gives us peace to know that we can trust You to avenge the wrongs done to us. At the same time, Father, we are reminded that we need Your forgiveness because we have also wronged others. Please lead us to live balanced lives filled with Your grace and truth. Grace to forgive others and truth to remind us we also need forgiveness. In the name above all names, the Lord Jesus Christ, we pray. Amen.