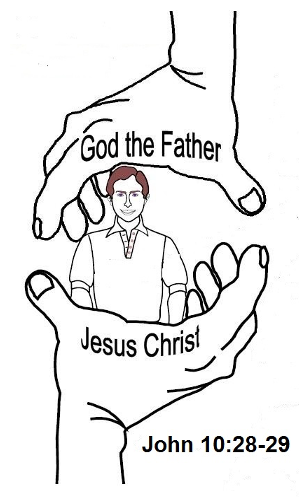 In John 10:22-30, we have learned so far that I can experience security forever when I…

The third and final way I can experience security forever is when I REALIZE THE BENEFITS OF BELIEVING IN JESUS (10:28-30). Jesus promises three benefits to His sheep i.e. to those who believe in Him.

1. THE GIVING OF ETERNAL LIFE (John 28a). Jesus said, “And I give them eternal life.” (John 10:28a). He does not say and “they earn eternal life.” No, He gives it to them. It is a gift. As one man in an audience said while listening to a salvation message, “Oh it’s beautiful. I always thought I had something to do, but now I see I have something to receive.” Eternal life is a gift to be received. If you have it, you have it eternally. If a person ever lost eternal life, then Jesus just told a lie.

2. THE GUARANTEE AGAINST PERISHING IN HELL (John 10:28b). How secure are those who receive eternal life from Jesus the moment they believe in Him? Christ says, “and they shall never perish.” (John 10:28b). The construction of the Greek clause “they shall never perish” (kai ou mē apolōntai eis ton aiōna), with a double negative literally reads “and never not shall they perish for the age.” How long is “never”? (Pause). It is forever. The moment we believe in Jesus, we have the assurance that we shall never perish in hell for eternity. Jesus is very emphatic here. He wants His sheep to be confident that they will never experience eternal ruin or destruction in hell. Eternal life is God’s life. You can no more perish in hell than God can perish in hell. Believers do sin and stumble, but our Good Shepherd will “never” let us perish in hell! Even if you were to desire to go to hell to spend eternity with unsaved family and friends after you believe in Jesus for eternal life, it is too late because Christ guarantees you shall “never perish”! The third benefit of believing in Jesus is this…

3. THE GRASP THAT LASTS (John 10:28c-29). Christ then says, “neither shall anyone snatch them out of My hand.” (John 10:28c). Why? Because Jesus securely holds each believer in His hand and no one – not a lion, wolf, thief, bandit, false teacher, popular speaker, demon, devil, not even you yourself – is strong enough to snatch (John 10:12) them out of His hand. The word “snatch” (harpasei) means “to snatch, seize, i.e., take suddenly or vehemently.” It is impossible for even one sheep to be removed from the hand of our Good Shepherd. And no matter how strong or persuasive they are, not one of His sheep can wriggle out of His grasp.

This Shepherd is all-powerful and the sheep in His hand have nothing to fear. The security of the frail sheep does not depend on their grip on God, but on God’s grip on them. And God will never let go of them. If you come to Jesus by faith, He has got you. When you are too weak and your hands go limp, He will still be hanging on to you. Our eternal security does not depend upon our own ability but upon the ability of our Shepherd to protect and preserve His flock.

There are some who do not believe in eternal security who insist that a believer can jump out of the hands of Jesus or God the Father on his or her own initiative. But this position cannot be supported contextually. “They shall never perish” (John 10:28b) means just that. If a believer could jump out of God the Father’s and God the Son’s hands, then Jesus just told a lie here. The phrase, “No one” (John 10:29), includes the believer himself. Even if you take the “no one” to be a reference to “the thief” (John 10:10a) which represents the devil or his false teachers, even they cannot snatch the believer out of the hands of God the Son and God the Father, not even by persuading or deceiving the believer to jump out.

Jesus then says, “I and My Father are one.” (John 10:30). Jesus claims oneness with His Father in the sense that He and the Father both provide the sheep with security forever. They both are God. But He is not saying they are the same Person. They are two distinct Persons with the purpose which guarantees the eternal destiny of all who believe in Christ. If He had meant they were the same Person, He would have used the masculine form of the word translated “one” (heis). Instead He used the neuter form of the word (hen) to emphasize that they are one in their actions. This explanation also harmonizes with the context, since Jesus had said that He would keep His sheep secure forever (John 10:28), and that His Father would also keep them secure forever (John 10:29).

Conclusion: When you believed or trusted Christ alone for eternal life, why is eternal life guaranteed?

1. Because security is not you holding God, but God holding you forever.  Security is not based on our feeble hold on Christ, but on His firm grip on us. In order to lose your eternal life, you would have to be greater than God Himself. And that is not going to happen! What wonderful security God provides for us especially in a day when so many dreadful things are happening.

2. Because no one is strong enough to open God’s hand and remove any Christian who is held securely in it. Do you realize how strong God’s fingers are? In Psalm 8:3 we are told, “When I consider Your heavens, the work of Your fingers, the moon and the stars, which You have ordained.” Imagine how strong God’s fingers are which placed the stars and moon that we see in our night sky! No one is strong enough to pluck us out of God’s hands. He has such a good grip on us that we could not get out of it even if we wanted to. It is a done deal!

A newlywed couple was given a lottery ticket by the bride’s aunt and uncle as a wedding gift. Two days later they discovered they had the winning numbers. The uncle and aunt had done this before for other newlyweds, but this was the first time any of the couples had received the winning numbers. When the aunt was asked whether they would try to get any of the money she replied, “I gave them the ticket as a gift, and a gift it will remain.”

Christ gives us eternal life the moment we believe in Him for it and He never takes it back. ﻿We are secure forever not because of our grip on God but because of His grip on us. We are forever in His hands!

Prayer: Precious Lord Jesus, what wonderful security You provide for me especially during a time when there are so many dreadful things happening in the world that can easily leave me feeling insecure. Knowing that I am secure in Your promises of eternal life, of never perishing, and never being snatched from Your hands gives me unspeakable joy and peace! Even if my grip on You becomes weak and my hands grow limp, Your hands will not let go of me! The assurance that I will go to heaven is not based upon my grip on You, but upon Your grip on me. I do not have to live in fear of losing my relationship with You. This frees me up to focus on You and the work You have set before me. Oh my Good Shepherd, please lead me to those who are overwhelmed with insecurity so I may share with them about Your security that lasts forever. In Your powerful name I pray. Amen.