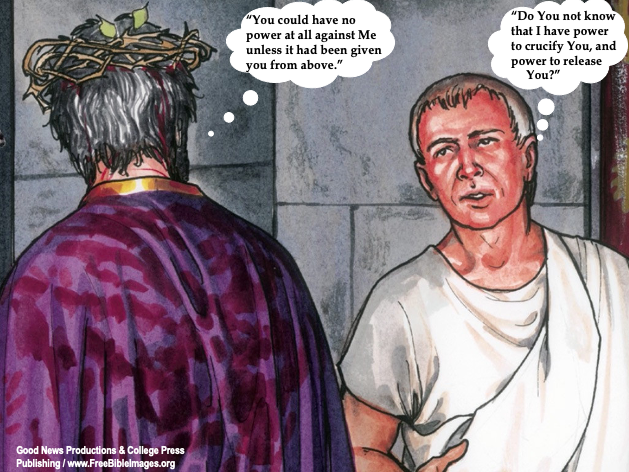 “10 Then Pilate said to Him, ‘Are You not speaking to me? Do You not know that I have power to crucify You, and power to release You?’ 11 Jesus answered, ‘You could have no power at all against Me unless it had been given you from above. Therefore the one who delivered Me to you has the greater sin.” John 19:10-11

In John 19:4-42, the apostle John has recorded different pictures containing lasting lessons from the last day of Jesus’ life before the Roman soldiers sealed His tomb containing His dead body. John has several images he wants to make sure that we see in the life of Jesus Christ. Last time we learned that like Pilate, we can avoid doing the right thing because of the cost involved (John 19:4-7).

Today we discover that NO ONE HAS POWER IN THIS WORLD EXCEPT WHAT IS GIVEN TO THEM BY GOD (John 19:8-12). After Pilate affirmed Jesus’ innocence again before the crowd (John 19:6b), the Jews took a different approach to persuade him to put Jesus to death. The Jews told Pilate that they have a law that says Jesus ought to be put to death “because He made Himself the Son of God.’ ” (John 19:7).

John then informs us, “Therefore, when Pilate heard that saying, he was the more afraid.” (John 19:8). Although Pilate was not a religious man, like most Romans he was superstitious. Every Roman knew stories of gods or their offspring appearing in human form. Pilate was already afraid of losing control of the situation and now he feared he was involved in a trial against a god. 1

When Pilate learned that Jesus claimed to be the Son of God, he “went again into the Praetorium, and said to Jesus, ‘Where are You from?’ But Jesus gave him no answer.” (John 19:9). Pilate wants to find out if Jesus was a god. If Jesus was, Pilate did not want to mistreat Him. But Jesus had already alluded to His heavenly origin (John 18:36-37) and unbelieving Pilate would not have understood if He explained further, so He refused to answer, fulfilling yet another prophecy. The prophet Isaiah said of the Messiah, “He was oppressed and He was afflicted, yet He opened not His mouth; He was led as a lamb to the slaughter, and as a sheep before its shearers is silent, so He opened not His mouth.” (Isaiah 53:7).

Pilate was agitated that Jesus ignored him and perhaps somewhat surprised that Jesus did not try to defend Himself, so he says to Him, “Are You not speaking to me? Do You not know that I have power to crucify You, and power to release You?” (John 19:10). Pilate reminds Jesus of his authority to put Jesus to death or to set Him free. “﻿But when someone insists on shouting, ‘Don’t you know that I’m in charge here?,’ it usually means he’s uncertain himself.” 2

But Jesus affirmed that His life was not in Pilate’s hands, but in the hands of God Himself. “Jesus answered, ‘You could have no power at all against Me unless it had been given you from above. Therefore the one who delivered Me to you has the greater sin.’ ” (John 19:11). Pilate’s power was delegated by God. “The authorities that exist are appointed by God.” (Romans 13:1). All human rulership is determined by God (Daniel 4:17).

“﻿God grants authority and takes it away. Two important truths are wrapped up in Jesus’s statement. First, if a person exercises any authority on earth, ultimately that authority has been granted by God. So, will that authority be wielded for his kingdom purposes or not? How you answer that question has serious consequences because you will one day be called to give an account for your own use of authority. Second, remember to maintain a heavenly perspective: God is your ultimate authority. Anyone who seeks to rule over you illegitimately will not have the final say. He may be a boss, but he isn’t the boss.” 3

The phrase, “the one who delivered Me to you has the greater sin” probably refers to the Jewish high priest, Caiaphas, not Judas or Satan. Although Pilate was accountable to God for his gross violation of justice in this civil trial, the one who delivered Jesus over to Pilate, Caiaphas (Matthew 26:57-27:2; John 18:24), was guilty of a “greater sin” because he had the Hebrew Scriptures to point him to the truth of Jesus’ identity as the Messiah-God and yet he closed his eyes to the truth. This is consistent with what Jesus taught about greater privilege means greater accountability (cf. Matthew 11:20-24). “The greater the knowledge of God’s revelation, the greater the accountability for those who reject it.” 4

There is a significant application for Christians in this verse. For those of us who know what is right and disobey there is greater accountability than for those who disobey out of ignorance. Believers who have been privileged to read and study God’s Word will be evaluated in light of this revelation given to them. This presents a challenge to Christian leaders to pursue God’s holy calling in their lives. 5

“From then on Pilate sought to release Him, but the Jews cried out, saying, ‘If you let this Man go, you are not Caesar’s friend. Whoever makes himself a king speaks against Caesar.’ ” (John 19:12). Since Jesus affirmed that He had come from God, Pilate kept trying to “release Him.” But the Jews squelched Pilate’s attempts to release Christ when they pitted Pilate against the Roman Emperor. If Pilate did not consent to their wishes to have Jesus crucified, they would accuse him of treason. Tiberias, the Roman Emperor, was suspicious and prone to violence. Pilate did not want to risk his political career or even his life for a Galilean rabbi.

This is an incredible scene! Jesus is standing alone with Pilate, His back torn open from the flogging, wearing a purple robe soaked in blood, and a crown of thorns pushed into his scalp causing blood to flow down His face. The bloodthirsty crowd is against Him.  The entire Roman government is behind Pilate and all the power that comes with it.  Pilate says to Jesus, “Why don’t You answer me? I’ve got the power in this situation to crucify You or to set You free. Talk to me.” Jesus looks Pilate right in the eye and says to him, “You are mistaken. You do not have the power or the authority. God has the power and authority to determine what happens here.”

Sometimes we make the mistake of thinking as long as circumstances are happening the way we want them to happen, then God must be in control. But when humanity’s temptations and sins seem to be in control, we think God has stepped off His throne. That is not true! For His own purposes God allows evil to reign and people to make sinful choices. This is especially true on this day in Jesus’ life. Christ had to face illegal trials and court proceedings, false accusations, and a gross violation of justice all for a greater cause – the salvation of the world.

Listen to what the apostle Peter said of Jesus’ sufferings and death. “22 Men of Israel, hear these words: Jesus of Nazareth, a Man attested by God to you by miracles, wonders, and signs which God did through Him in your midst, as you yourselves also know— 23 Him, being delivered by the determined purpose and foreknowledge of God, you have taken by lawless hands, have crucified, and put to death.” (Acts 2:22-23). When Jesus was lawlessly and unjustly delivered up to be crucified it was “by the determined purpose and foreknowledge of God.” God’s sovereign plan and purpose included the use of evil and “lawless” men to deliver up His Son to be crucified. But notice that it was Jesus “whom God raised up, having loosed the pains of death, because it was not possible that He should be held by it.” (Acts 2:34). God was in control of the last day of Jesus’ life before the cross and He is in control of our lives as well to accomplish His plan and purposes.

We will never face a situation where God is not in control. That is what Jesus is telling us here. It is our responsibility to remember that God is in control of life. Jesus understood this. He was able to humbly and graciously face His accusers and enemies (I Peter 2:21-23a) because “He committed Himself to Him who judges righteously” (I Peter 2:23b). He did this as “an example, that you should follow His steps.” (I Peter 2:21b).

You may be facing some very stressful circumstances right now. Things may seem out of control to you. You may have concluded that God has stepped off His throne because it seems as though your world is spiraling out of control. Would you go with me to God’s throne of grace right now? He understands what you are going through and how you feel (Hebrews 4:15). He still occupies His throne and He wants to give you the mercy and grace you need right now to rest in His love (Hebrews 4:16).

Prayer: Precious Father in heaven, we are amazed at the majesty of Jesus Christ before His accusers and the one whom You gave the power to crucify Him or release Him. We are so grateful that Jesus understood You were in control of everything that led up to His death on a cross for our sins. Lord God, as we face difficult circumstances in life, please renew our minds with this truth that You are the One who gives power to those in positions of authority over us. Even though they may make evil decisions which cause pain to us and to those we love and care about, You are still in control and are in the process of fulfilling Your plan and purpose through these difficult situations. Please enable us to continue to love and serve You no matter what we face. In the mighty name of Jesus Christ we pray. Amen.