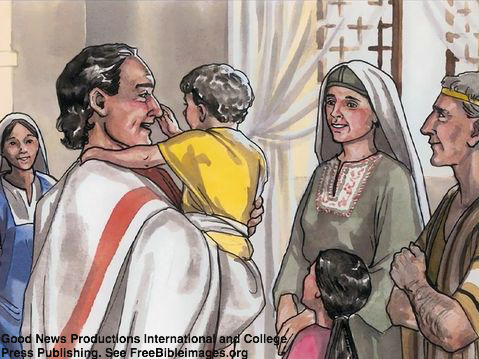 “So the father knew that it was at the same hour in which Jesus said to him, ‘Your son lives.’ And he himself believed, and his whole household.’” John 4:53

The final way to experience the life-giving word of Christ is THROUGH TRUSTING IN CHRIST’S PERSON (John 4:51-54). Jesus and His disciples remained in Cana that night, but the nobleman did not. He started back to Capernaum alone that evening over the Galilean hills. After dark, he probably stopped to sleep, then arose early the next morning and started on his way. He then noticed some travelers coming his way. “And as he was now going down, his servants met him and told him, saying, ‘Your son lives!’”(John 4:51). Momentarily shaken, the nobleman realizes that these words were similar to Jesus’s words the night before.

Recovering his composure, he thought of a question. Perhaps his son’s healing was a coincidence. Perhaps when he left home his son had begun to get better by himself. If that were the case, his trip to see Jesus would have been needless. There’s one way to find out. “Then he inquired of them the hour when he got better. And they said to him, ‘Yesterday at the seventh hour the fever left him.’” (John 4:52). The seventh hour would have been 1 p.m. when the fever left his son. Fever left him? So, it wasn’t a matter of beginning to get better, but of getting well all at once. Jesus’s words were not the start of a process of healing, but the point at which his son’s health was completely restored.

The Person who spoke these words with such a miraculous result, unhindered by the hills and valleys that separated Him from the nobleman’s sick son, was no ordinary man. After all, had it not been the word of the Creator God that caused all things to leap from nothingness into existence?! “6 By the word of the LORD the heavens were made, and all the host of them by the breath of His mouth… 9 For He spoke, and it was done; He commanded, and it stood fast.” (Psalm 33:6, 9).

This was the Messiah-God, the Christ. The nobleman believed in Jesus at this moment for eternal life. “So the father knew that it was at the same hour in which Jesus said to him, ‘Your son lives.’ And he himself believed, and his whole household. This again is the second sign Jesus did when He had come out of Judea into Galilee.” (John 4:53-54). What did the nobleman do after he believed in Christ alone for eternal life? He “ate his food” as we learned in the last chapter – he led his whole “household” (family and servants) to believe in Christ. It probably didn’t take long for the family to be convinced of their need to believe in Christ. The power of Jesus’s Word was the same from Samaria to Galilee, from Sychar to Capernaum. The power of Jesus’s word creates life in every believing heart.

And His Word does the same thing today. Wouldn’t it be great to see people like the royal official come to Christ today? To see people in high places put their faith in Jesus for their salvation? To see our governor, state representatives and senators, mayor, and city council members all come to faith in Christ (if they have not already), and then lead their family and friends to do the same?! That’s what it is all about, isn’t it?!

This second miracle that John records pictures salvation in the following ways:

1. Like the miracle, salvation takes place at a POINT in time, and is not a PROCESS. Just as the nobleman’s son was healed at the moment Jesus spoke, so Christ gives eternal life the moment a person believes in Him for it (John 3:15-16).

2. Like the miracle, salvation is a TOTAL transformation. The healing of the nobleman’s son was complete, not partial. Likewise, when a person trusts Christ for eternal life, they undergo a complete transformation. They have passed from spiritual sickness to spiritual health, from death into life (John 5:24). They are completely forgiven, never to come under judgment again to determine their eternal destiny.

3. Like the miracle, salvation is a total work OF GRACE. Just as the nobleman did not contribute to the healing of his son, so we cannot contribute to our own salvation. “For by grace you have been saved, and that not of yourselves; it is a gift of God, not of works, lest anyone should boast.” (Ephesians 2:8-9). Salvation is a gift that we receive by grace through faith in Christ. We can do nothing to make ourselves deserving of heaven. Only Christ can save us.

A few years ago, our minivan broke down 1.5 miles from my parent’s home the day before Christmas. I was helpless to move the van. Fortunately, my nephew-in-law had a flatbed tow truck. So I trusted him – a person – to take me and my van to our destination using his tow truck. God is asking us to trust a Person, His Son, Jesus Christ, to save us from our sins and take us to heaven. The moment we do, He instantly gives us the gift of eternal life and guarantees to take us to heaven in the future.

God wants us to experience His life-giving word. We can do that through the TESTIMONY of His People… TRUSTING CHRIST’S POWER… PROMISE… and His PERSON. Maybe you feel like the nobleman. You feel hopeless and afraid. The wrong things you have done have separated you from God and you have nowhere else to turn but to Jesus now. He loves you, and died in your place on a cross and rose from the dead. And He wants to give you His life-giving Word if you will trust Him to do so. Jesus said: “And this is the will of Him who sent Me, that everyone who sees the Son and believes in Him may have everlasting life; and I will raise him up at the last day.” (John 6:40). Only Jesus’s word can give us life that never ends and guarantee a future resurrection to all who believe in Him!

Prayer:  Only Your Word, Lord Jesus, can give me life that never ends. Your Word is not limited by distance nor the condition of its recipient. In this world filled with chaos and hatred, I pray my Lord and my God, that You will bring people in higher places (like the nobleman in this second miracle recorded in John’s gospel) to trust in You alone for everlasting life. I also pray they will share this good news of everlasting life with their family, friends, and countrymen. Please turn this world upside down with Your message of grace so that more people can experience Your life-giving Word. In Jesus’s name. Amen.