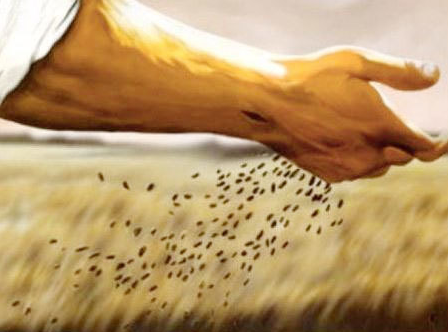 “Therefore hear the parable of the sower.” Matthew 13:18

Jesus explains His parable of the sower (Matthew 13:2-9) to His disciples to prepare them for the different types of responses to the preaching of God’s Word (Matthew 13:18-23). Each soil in this parable represents a different response to God’s message. Some to whom we share the gospel are like “the wayside” soil (Matthew 13:4, 19) who will not receive or believe in Jesus (Matthew 13:19; Luke 8:12).

Others are like “the stony places” (Matthew 13:5-6, 20-21) who “believe [the gospel] for a while” (Luke 8:13) but never really make a commitment to follow Christ as His disciple and “fall away” because of adversity (Matthew 13:20-21; Luke 8:13). They are “hearers only” of the Word like James talks about (James 1:22). They deceive themselves into thinking they can grow spiritually simply by hearing God’s Word without doing what it says. They are not willing to follow Jesus regardless of the costs.

A third type of person we will discover is like the seed that “fell among thorns” (Matthew 13:7, 22). These are those who believe in Jesus and start to follow Him, but they never bear much fruit because they are so distracted by worldliness and wealth (Matthew 13:22; Luke 8:14).

So far this has been disappointing. If this is the kind of response we can expect to get from many people, why go on? Jesus tells us why! He tells us not to become discouraged because eventually we will come across the fourth kind of person, a person who bears much fruit after believing the gospel (Matthew 13:8, 23; Luke 8:15). Unless we are willing to endure those who reject His message, those who fall away, and those who are too distracted, we will never discover the pure joy of finding those who are fruitful!

And notice that Jesus tells us that some of these fruitful ones will bear fruit “a hundredfold, some sixty, some thirty” (Matthew 13:23). One of the blessings we will experience if we continue to faithfully sow the seed of God’s Word, is that we will begin discovering these amazingly productive believers. These fruitful believers are “super spreaders” because they are super at spreading the seed of God’s Word. These are the “doers of the word” (James 1:22). They will far exceed us in witnessing and planting new churches.

The way to discover these “good soil” believers, is to train everyone in discipleship who believes the gospel! The “good soil” believers will quickly emerge. They will immediately become doers of the Word of God. As these super spreaders emerge among us, we will begin to see a more significant movement take place in our country and world as well. But the whole process begins with those who are faithful to sow the seed – to preach the gospel and train in discipleship those who believe in Jesus (Mark 16:15; Matthew 28:19-20).

This is the key to a transformed life and nation, not the political process. I believe more than ever, that Jesus is calling His church to return to the discipleship process in order to see our nation and world change for His glory! Christ implores us, “Hear the parable of the sower.” (Matthew 13:18). Will we hear and obey our Lord and Master! Perhaps today is when some of us begin  to sow the seed of His Word!!! Please know that His Word will not return to Him void, but it shall accomplish what He pleases, and it shall prosper in the thing for which He sent it (Isaiah 55:11)!

Prayer: Lord Jesus, all authority has been given to You in heaven and on earth (Matthew 28:18). Your one and only plan to reach the world for Your glory is the discipleship process whereby we preach Your gospel message to everyone in the world, and then call those who believe Your gospel to commit to follow You as a disciple through water baptism. Then we are to teach them to obey all Your commands (Mark 16:15; Matthew 28:19-20). Please enable us to be faithful to spread the seed of Your gospel message to this world which is perishing without You, Lord Jesus! Thank You for explaining the different types of responses we can expect from our audiences as we proclaim Your Word. By Your grace, enable us to endure those who reject Your message, those who fall away, and those who are too distracted, so we may discover the pure joy of finding those who are super at spreading the seed of Your Word to others!!! Your discipleship process is what transforms individuals, nations, and the world, not a political process. Please forgive us for looking in the wrong places for transformation. I beg You to bring us back to the basics of the Bible and the discipleship process, my Lord and my God. May Your Holy Spirit give us the boldness and vision to pursue You and Your discipleship process until all hear Your gospel message!!! Thank You for the assurance that You are always with us as we make disciples for Your glory (Matthew 28:20b). In Your matchless name I pray Lord Jesus. Amen. 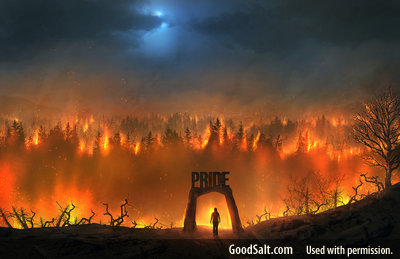 “Everyone proud in heart is an abomination to the Lord; though they join forces, none will go unpunished.” Proverbs 16:5

This verse really hit home with me today. God detests or loathes (“abomination”) those who are “proud in heart.” Pride is what led Lucifer or Satan, the most beautiful and intelligent of all God’s angels, to rebel against God and establish a rival kingdom (cf. Isaiah 14:12-14; Ezekiel 28:11-19). If that is not enough reason to avoid pride, then know that no proud person will “go unpunished” even “though they join forces.” This last phrase literally means “though they are hand to hand.”

An example of this unified effort of proud people is seen in the making of the Tower of Babel in Genesis 11. When the people of the world tried to preserve their unity and make a name for themselves by building a magnificent tower whose “top is in the heavens” lest they “be scattered abroad over the face of the whole earth” (Genesis 11:1-4), the Lord came down and “scattered them abroad over the face of all the earth” by confusing their “language” which held them together (Genesis 11:9). God had instructed the people to “fill the earth” (Genesis 1:28; 9:1), but they rebelled against God’s will and placed their security in a large city and tower. God confused their language to force them to do what they were unwilling to do – “fill the earth.”

The Lord Jesus has commanded all Christians to “Go into all the world and preach the gospel to everyone” (Mark 16:15) and to “Go therefore and make disciples of all the nations…” (Matthew 28:19). When believers place their security in large gatherings of Christians instead of in the Lord Jesus Christ and refuse to go to the lost, He may bring difficulties into their lives to persuade them to obey His command to go to the lost people of a different culture or nation.

It is much better to obey the Lord than to act independently of Him. God is not against large churches. But He is against the proud who refuse to obey His commands. “God resists the proud, but gives grace to the humble” (James 4:6). When pride fills our hearts, we are declaring war against God.But please understand this: No one has ever won a fight against God and no one ever will.

Just ask the kings of Egypt (Exodus 1-14) and Babylon (Daniel 4-5). They were proud men who thought they had built their kingdoms on earth and no one could destroy them. They viewed the God of the Bible as a powerless deity or as a figment of one’s imagination. Each of them learned the truth of Proverbs 16:5 the hard way. “Everyone proud in heart is an abomination to the Lord; though they join forces, none will go unpunished.”

Those of us who are believers in Jesus Christ can also be filled with pride. When James wrote his letter to Jewish believers, he also warned them of the pitfalls of pride. James’ readers were engaged in fighting with one another because they proudly gave in to their selfish desires much like the world (James 4:1-3).  James warned them and said that their friendship with the world was “enmity with God. Whoever therefore wants to be a friend of the world makes himself an enemy of God.” (James 4:4). If we commit adultery with the world, God is not going to sit back and do nothing. His “Spirit Who dwells in us us yearns jealously” for God’s bride (James 4:5). He does not want to share His bride with anyone, especially this world.

So what does a jealous God do with His children when they proudly commit adultery with the world? He “resists the proud” (James 4:6a). God opposes His children who proudly attach themselves to this world. Why? Because such pride imitates the king of pride – the Devil who exalted himself above God (Isaiah 14:12-14). The only solution is for believers to “humble” themselves before the Lord to experience an outpouring of His “grace” (James 4:6b).

How do we humble ourselves? First, we must “submit to God” (James 4:7a). We do this by recognizing our own weaknesses and stop fighting with God. We then yield to God as our ultimate and final authority. Second, we “resist the devil” (James 4:7b) by speaking Scripture to him just as Jesus did in the wilderness (Matthew 4:1-10), and then the devil “will flee from you” (James 4:7c) as he fled from Jesus (Matthew 4:11). Third, we “draw near to God and He  will draw near to” us (James 4:8a). We do this through repentance – “Cleanse your hands, you sinners; and purify your hearts, you double-minded” (James 4:8b). We live in a world that calls wrong right and right wrong. Those are expressions of pride.

James says to “Humble yourselves in the sight of the Lord, and He will lift you up” (James 4:10). When we sin against God we are to agree with Him that it is sin. The world downplays sin and rejects personal responsibility. But Christians are to do the opposite. We must take sin seriously as God does and stop blaming others for our sinful choices. I like what one author writes, “God’s elevator to the top always starts with a trip down.” Humility leads to exaltation. Pride leads to humiliation.

If you are like me, however, the daily news reports make it seem like the proud and the wicked are growing in numbers and unity, with little or no punishment for their behaviors. It seems that right is wrong and wrong is right. Truth is no longer important. But listen: God is not done yet. He remains faithful to His Word.And He says that those who are proud in heart are an “abomination to the Lord; though they join forces, none will go unpunished” (Proverbs 16:5).