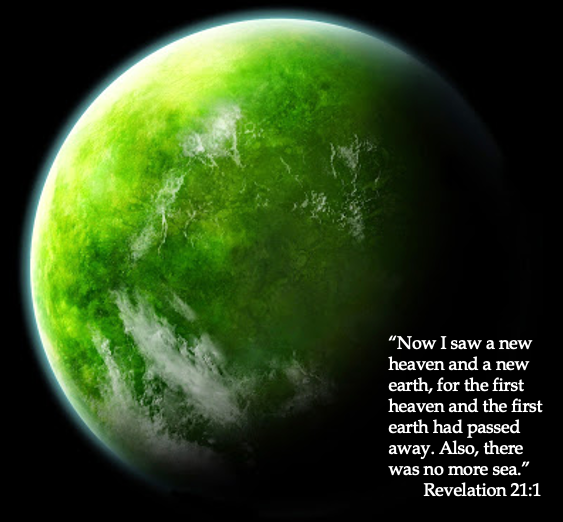 “Now I saw a new heaven and a new earth, for the first heaven and the first earth had passed away. Also there was no more sea.” Revelation 21:1

“During the Second World War, when it was hard for Franklin Roosevelt to travel among the troops because of his disability, First Lady Eleanor Roosevelt took his place, and she became a favorite of soldiers around the world. She sent cables and letters back to FDR, becoming his eyes and ears. On one such trip in the Pacific theater she spent an evening talking to a group of soldiers, and later told her husband there was only one thought on all their minds – the desire to finish the battle so they could go home.” 1

Those of us who believe in Jesus Christ feel the same way about heaven. We are deployed on planet Earth in a battle between God and His enemies, but it is only a short-term assignment. Goodness and mercy will certainly follow us all the days of our lives. But what we eagerly await is dwelling in the house of the Lord forever (Psalm 23:6)!!! 2

– “Write the things which you have seen.” This refers to the past vision of Jesus in all His glory standing among the seven lampstands representing the seven churches in Asia Minor or modern-day western Turkey (Revelation 1).

– “And the things which are.” This includes the messages from the exalted Lord Jesus’ to the seven historical churches in Asia Minor (wester modern-day Turkey) in the first century (Revelation 2-3). ﻿Jesus gives these seven local churches warnings and encouragements that are as applicable today as they were in the first century.

Many people form their views about heaven from television, movies, religious experiences, and their imaginations instead of a thorough study of the Bible. But the Bible is filled with over five hundred references to heaven, 3 the most detailed of which is found in the final two chapters of Revelation.

Beginning with verse 1 of chapter 21, God gives the apostle John a new vision of what heaven is going to be like. “Now I saw a new heaven and a new earth, for the first heaven and the first earth had passed away. Also, there was no more sea.” (Revelation 21:1). John “saw a new heaven and a new earth.” This is not a renovation of the present “heaven” (atmosphere and planetary space) and “earth” as some suggest, 4 but a complete remake whereby God re-creates a brand-new heaven and earth out of nothing. 5 The word “new” (kainos) means “different from the usual, impressive, better than the old, superior in value or attraction.” 6 The “new” heaven and “new” earth will not only be new in a chronological sense, but also in a qualitative sense. 7

Swindoll writes, “To use a film metaphor, this isn’t a sequel – it’s a completely new and different production. It isn’t simply a reedited version, enhanced with clearer sound, brighter colors, and a smattering of digitally enhanced special effects. This is no reedit – it’s a remake!” 8

John Walvoord says, “The most natural interpretation of the fact that earth and sky flee away [20:11] is that the present earth and sky are destroyed and will be replaced by the new heaven and new earth. This is also confirmed by the additional statement in 21:1, where John sees a new heaven and a new earth replacing the first heaven and first earth. Frequent references in the Bible seem to anticipate this future time when the present world will be destroyed (Matthew 24:35; Mark 13:31; Luke 16:17; 21:33; 2 Peter 3:10)… Passages such as Revelation 20:11 and 2 Peter 3:10 state explicitly that this destruction is literal and physical. It would be most natural that the present heaven and earth, the scene of the struggle with Satan and sin, should be displaced by an entirely new order suited for eternity. The whole structure of the universe is operating on the principle of a clock that is running down. What could be simpler than for God to create a new heaven and a new earth by divine decree in keeping with His purposes for eternity?” 9

Let’s remember that when God created the universe, including planet Earth, it was all perfect (Genesis 1:31). There was no imperfection in what God had made. The world God created was perfectly suited for humankind, whom He made to enjoy an intimate relationship with Him forever. But when Adam and Eve disobeyed God (Genesis 3:1-6), it did more than break humanity’s relationship with its Creator God (Romans 5:12), it also subject the entire creation to “decay, disharmony, and hostility. When farmer’s plant vegetables, they harvest weeds. When they try to grow grain, fruit, and flowers, they get thistles, brambles, and thorns. The evil of humanity resulted in more than just the fall of Adam and Eve. It affected all creation. From the center of Eden to the edge of the cosmos, creation has groaned for redemption since the Fall.” 10

The apostle Paul wrote: “20 For the creation was subjected to futility, not willingly, but because of Him who subjected it in hope; 21 because the creation itself also will be delivered from the bondage of corruption into the glorious liberty of the children of God. 22 For we know that the whole creation groans and labors with birth pangs together until now.” (Romans 8:20-22). Human sin corrupted creation (Genesis 3:17-19; Romans 8:20-22) and dragged it down into the messes we see today. The existence of earthquakes, typhoons, volcanoes, and disease are the result of humankind’s sin against God. 11 “The entire created natural order is groaning and undergoing agonies that look toward a new age.” 12

“God will un-create the universe because each part of it is affected by sin, and the eternal state must be completely free from sin’s consequences. But that doesn’t mean the end for planet earth. Every molecule, atom, proton, and neutron in existence today will disintegrate only to be replaced by a glorious new creation.” 13

I have wondered what the “new heaven” or universe will be like. One of my mentors had suggested that the planets were able to sustain life prior to the fall. 14 But when Adam and Eve sinned, the affects of sin and death not only spread throughout planet Earth but also throughout the universe, including our solar system (Romans 8:20-22), rendering planets outside of earth unable to sustain life. This would explain why water has been found on other celestial bodies in the universe. 15

While I cannot be dogmatic, I do think when God creates “a new heaven and a new earth,” it is possible that planetary spacewill once again support life.If so, other planets may sustain human life and provide additional places to colonize as the new earth’s human population grows among the descendants of believers who survived the Tribulation and entered the Millennial Kingdom of Christ without glorified bodies (Matthew 25:31-46; Isaiah 65:20). These descendants will be able to multiply and fill the earth (and beyond) much like Adam and Eve would have done if they had not sinned. As the new earth’s population grows, these people in non-glorified bodies will be able to live on other habitable planets throughout the universe. While one cannot be dogmatic about this, it is quite possible that this expansion of the human population throughout the universe will continue forever. 16

John then informs us, “Also there was no more sea” (21:1c).One significant way the “new earth” will be different than the current one is that there will be “no more sea,” which means that the oceans that cover nearly 71% of the earth’s surface today will become land masses so the huge number of believers in Jesus from all ages will be able to live on the new earth. “The oceans affect the atmosphere, the climate, and other living conditions as well as human transportation.” 17

Dr. Jeremiah writes, “The ecology of the new heaven and earth will be entirely different than that of the earth we live on today. And there will be no need of salt water, because salt is a preservative, and there will be no decay. But there will be fresh water in the new heaven [and earth] – the river of life, flowing from the throne of God in the New Jerusalem, which will rest upon the ground during the eternal state. These waters will be more beautiful than any landscape we can fathom in this life.” 18

Those of us who love the ocean may be very disappointed to hear there will be no more seas. Does that mean there will be no more surfing, tide pools, snorkeling, and fun on the beach, and no more intriguing oceanic marine life? Keep in mind there will be an incredible river that flows through the New Jerusalem (22:1-2). But how much more water will be outside the city? Flowing rivers do go somewhere. Some of the world’s lakes today are very large and ocean-like, so it is quite possible that the new earth could have even larger bodies of fresh water 19 that provide even more enjoyable aquatic activities, including incredible marine life. 20

The absence of oceans on the new earth will not be a negative experience. The Bible tells us “There shall be no more death, nor sorrow, nor crying. There shall be no more pain, for the former things have passed away.” (Revelation 21:4b). Alcorn writes,“There will be no more cold, treacherous waters that separate nations, destroy ships, and drown our loved ones.”21 Whatever the absence of oceans will be like on the new earth, one thing for sure is it will be much more wonderful than our finite minds can imagine now.

Prayer: Lord Jesus, thank You so much for Your Word which reveals what our future home with You will be like on the new earth where sin and death will be no more. The absence of seas on the new earth means living conditions and climate will be much more stable and enjoyable than we are used to now. Having no more oceans in the future means there will be more land masses for people to inhabit. Use us now O Lord to share the good news of Your free offer of eternal life to all who will believe in You so more and more people can make reservations to live on the new earth with You and Your people forever. In Your mighty name we pray, Lord Jesus. Amen.

15. See Dr. Ron Samec’s April 1, 2015, article entitled “Mars – The Other Blue Planet?” at answersingenesis.org; cf. An article entitled “Are there oceans on other planets?” at the National Ocean Service’s website – www.oceanservice.noaa.gov.

16. This topic also originated from a discussion with Zane C. Hodges in the late 1980’s.