This is the sixth video in a series about the gospel of John – the only book of the Bible whose primary purpose is to tell non-Christians how to obtain eternal life and a future home in heaven (John 20:31). This video looks at the sixth miracle of Jesus recorded in the gospel of John involving His miraculous healing of a man born blind (John 9:1-41).

The movie clip subtitles are from the Good News Translation. All other Scripture are from the New King James Version of the Bible unless otherwise noted. Gospel of John pictures are used with permission from Jesus.net, www.GoodSalt.com,  John Paul Stanley / YoPlace.com, or they are creative common licenses. The Gospel of John movie clip is used with permission from Jesus.net. You may view the entire Life of Jesus movie at https://jesus.net/the-life-of-jesus/. 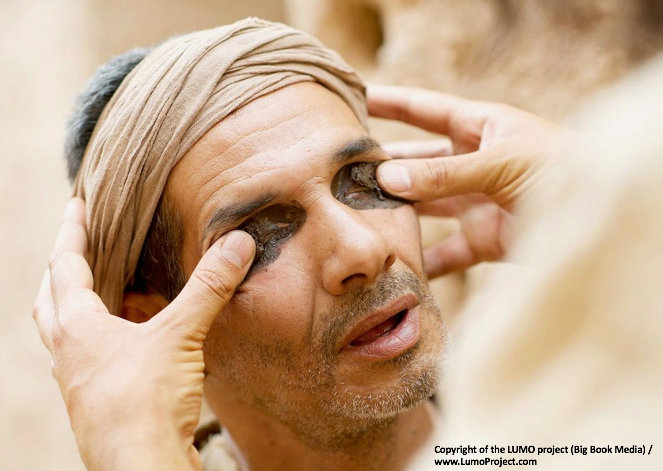 “When He had said these things, He spat on the ground and made clay with the saliva; and He anointed the eyes of the blind man with the clay.” John 9:6

Saliva was a well-known Jewish remedy for eye trouble. Clay was the same substance from which man was created (Genesis 2:7). ﻿“Thus the word of God (i.e., spit from Jesus’s mouth) mixed with humanity (i.e., dirt from which man was created) provided the basis for the miracle. By using His saliva, Jesus was imparting divine DNA to the human defect in order to bring about a supernatural transformation of his humanity. This was to serve as a physical illustration ﻿of the supernatural spiritual transformation Jesus came to bring (see Isa 35:4-5).” (Dr. Tony Evans, The Tony Evans Bible Commentary, p. 1782).

This was a creation miracle since this man’s blindness was congenital. Jesus used the clay as a tool to develop the blind man’s faith. The touch of a friendly hand would be reassuring to this man who had known darkness all his life. While the disciples showed insensitivity toward the blind man when they asked Jesus within earshot “Who sinned?” Jesus showed great compassion or pity toward this blind man by providing a gentle and soothing touch.

﻿When Jesus healed the blind man on the Sabbath with clay He had made, He broke two man-made laws of the Jewish people. Making clay and healing were both forbidden by the Pharisees on the Sabbath. This would cause more tension between Jesus and the Jewish religious leaders.

“And He said to him, ‘Go, wash in the pool of Siloam’ (which is translated, Sent). So he went and washed, and came back seeing.” (John 9:7). After anointing the blind man’s eyes, Jesus instructs him to go wash at the pool of Siloam. The man’s healing required an act of faith on his part. “The pool of Siloam” was originally built by King Hezekiah to provide a reservoir for water flowing through the Siloam tunnel from the Gihon Spring (2 Kings 20:20; 2 Chronicles 32:2-4). Rabbinic teaching associated this free-flowing fountain with God’s fountain during the Messianic kingdom. John informs his readers that the word “Siloam” is translated “sent.” The blind man was “sent” by the One “sent” by the Father.

Jesus did not promise he would be healed. He just told him to go wash. Christ did not give a speech about accepting your lot in life or taking the medicine that God has given you. Jesus was especially sensitive to the groans of suffering people. He cared more about His relationships with hurting people than He did about the rules and regulations of the religious establishment. The Bible says, “The Lord is near to those who have a broken heart, and saves such as have a contrite spirit.” (Psalm 34:18). The prophet Isaiah reminds us concerning the Messiah, “A bruised reed He will not break, and smoking flax He will not quench.” (Isaiah 42:3). The Messiah would not deal harshly with those who are already hurting nor would He extinguish what little hope a broken heart possessed. He uses His supernatural power to heal, not to punish. Jesus spent much of His ministry fighting disease and despair, not asking “Why?” or condemning with “Who sinned?”

When you hear about another’s misfortune, how do you react? Like the disciples – questioning and condemning? Or like Jesus with compassion to treat the problem?

John tells us that the blind man “went and washed and came back seeing.” His obedience to Christ’s command to wash in the “Sent” Pool enabled him to experience supernatural healing and gain his sight physically. This is a beautiful picture of salvation. When a spiritually blind person obeys the command to believe in the Son of God (I John 3:23), he or she is WASHED by the One “sent” by God, the Holy Spirit, who washes us clean with the waters of regeneration so we can SEE spiritually (John 7:37-39; Titus 3:5).

There is also an important lesson here for Christians. The blind man’s obedience to Christ enabled him to experience the blessing of physical sight. Likewise, OBEDIENCE to Christ is necessary for believers to see Jesus more FULLY. Hebrews 12:14 says, “Pursue peace with all people, and holiness, without which no one will see the Lord.” The pursuit of holiness is the prerequisite for seeing the Lord. Without holiness, no one can see God now or in the future.

Jesus said something similar in Matthew 5:8: “Blessed are the pure in heart, for they shall see God.” Purity of heart is necessary to see or perceive God. If a Christian is not pursuing holiness, there is a sense in which he or she cannot see God (I John 3:6). But when a believer’s eyes are enlightened, he can see many different facets of God (cf. Ephesians 1:17-21; 3:17-19; Colossians 3:9-11). Since all Christians will be without sin when they stand in God’s presence (I John 3:2), they should pursue holiness here and now. As we already learned in John 2:23-25 (cf. John 14:21; 15:14), Jesus will reveal Himself in a more intimate way to believers who obey Him.

This miracle raised the question about the man’s identity. “8 Therefore the neighbors and those who previously had seen that he was blind said, ‘Is not this he who sat and begged?’ 9 Some said, ‘This is he.’ Others said, ‘He is like him.’” (John 9:8-9a). But the former blind man said something that Jesus often said, “He said, ‘I am he.’ ” (John 9:9b). This healing of the blind man was another proof that Jesus was the Messiah-God. Those who knew this blind man best, his “neighbors,” were amazed at the remarkable change they saw in him. To see this man, whom they knew so well, walk with normal sight was so incredible they thought it must be a case of mistaken identity.

“Therefore they said to him, ‘How were your eyes opened?’ ” (John 9:10). To deny the miracle, certain ones raised the question of how this miracle took place. “He answered and said, ‘A Man called Jesus made clay and anointed my eyes and said to me, ‘Go to the pool of Siloam and wash.’ So I went and washed, and I received sight.’ ” (John 9:11). The man’s matter of fact report explains what happened. There is no exaggeration in his personal testimony. His reply indicates his faith – he accepted the miracle as fact. At this point he does not know who Jesus is – “A Man called Jesus.” “Then they said to him, ‘Where is He?’ He said, ‘I do not know.’ ” (John 9:12). Since he was blind at the time of the miracle, he had no idea where Jesus went. What is disturbing, however, is that no one celebrates with this formerly blind man regarding his restoration of sight. They can only ask, “Where is He?”

Jesus did not perform this miracle because of this man’s faith in Him to heal since the man did not know Jesus’ identity yet. This miracle was an incredible expression of God’s grace toward him. Supernatural healing does not take a special kind of FAITH. It requires the GRACE of God to intervene and heal.

1. To demonstrate His power. He may not perform a dramatic miracle as with the man born blind. But He may transform our attitude or heal a broken relationship. He may lift burdens of guilt and legalism off our shoulders so we can serve Him.

3. To disclose His pity or compassion. In the midst of much pain and suffering, Jesus’ reveals His gentle and healing touch in order to bring glory back to God. He is a gentle Savior with an abundance of grace for those in need of His healing touch.

Prayer: Lord Jesus, You are far more concerned about relationships with people than You are about keeping man-made rules and regulations. Thank You for pursuing me when I was spiritually blind and under the burden of religious rules and regulations. Thank You for using Your supernatural power to heal instead of to punish. I am very grateful that You gently touched me with Your Word when I was spiritually blind and without hope so I could see You for Who You truly are – the Christ, the Son of God –  Who gives everlasting life to all who believe in Him! Forgive me for the many times I have been insensitive to others who are in need of Your life-giving touch. Help me to see other people as You do – as broken and blind sinners who need the gentle and loving touch of the Savior. In Your name I pray. Amen.