This is the seventh video in a series about the gospel of John – the only book of the Bible whose primary purpose is to tell non-Christians how to obtain eternal life and a future home in heaven (John 20:31). This video looks at the seventh miracle of Jesus recorded in the gospel of John involving the raising of Lazarus from the dead (John 11:1-45).

The movie clip subtitles are from the Good News Translation. All other Scripture are from the New King James Version of the Bible unless otherwise noted. Gospel of John pictures are used with permission from  www.GoodSalt.com, John Paul Stanley / YoPlace.com, www.LumoProject.com, or they are creative common licenses. The copyrights of the images of the movie belong to Jesus.net. The Gospel of John movie clip is used with permission from Jesus.net. You may view the entire Life of Jesus movie at https://jesus.net/the-life-of-jesus/. 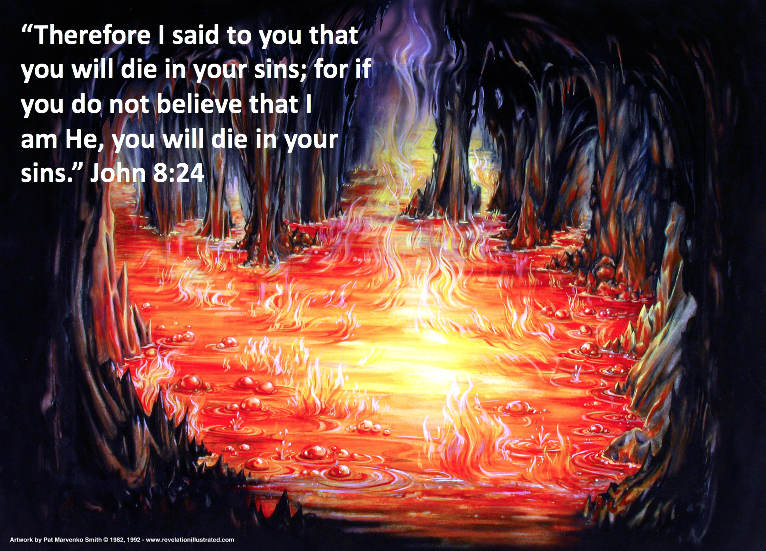 The second implication of Jesus’ claim to be the light of the world is this: CHRIST’S CLAIM DEMANDS THAT WE DEAL WITH THE FUTURE (21-24). “Then Jesus said to them again, ‘I am going away, and you will seek Me, and will die in your sin. Where I go you cannot come.’ ” (John 8:21). Those words will ring in their minds for all eternity! “You… will die in your sin.” The word “sin”(hamartia) is singular and refers to the sin of rejecting Christ (cf. John 16:9). Can you think of anything more horrifying than to hear such a statement from God Himself? To die without forgiveness of sins? Jesus says, “Where I go you cannot come.” Where did Jesus go when He died and rose again? He went to heaven to be with His Father (Mark 16:19; Acts 7:55; Rom. 8:34; Col. 3:1; Heb. 10:12; 12:2).

But in the after-life those in hell cannot transfer over to heaven (cf. Luke 16:26). Once the door is shut on that prison cell there is no escape. It is not like these work release programs where a criminal is free to go out during the day to work a job as long as he is back in his cell that night. There is no work release program in hell. The Pharisees would not be able to join Jesus in heaven because of their refusal to believe in Him for everlasting life.

But the Pharisees don’t get it. Their response reveals another obstacle that keeps people from coming to the light – self-righteous pride. “So the Jews said, ‘Will He kill Himself, because He says, ‘Where I go you cannot come’?” (John 8:22).The Pharisees believed that those who committed suicide went to the deepest place in hell, where there was a special torment reserved for them. Hence, they thought Jesus was talking about killing Himself and going to hell, and therefore they would never follow Him there because they were too good and decent for God to send them to hell or shut them out of heaven. But listen to how Jesus responds to them:

“And He said to them, ‘You are from beneath; I am from above. You are of this world; I am not of this world.’ ” (John 8:23). Jesus exposes their basic problem. Jesus was born from above; they were born in sin from below as a part of fallen humanity. They were a part of the ungodly world system; Jesus was not. They were born sinners who deserved to be separated from God for eternity.

Just as you cannot mix oil and water or light and darkness, you cannot mix that which is from above with that from below. Though they could not recognize it they were going to meet the supreme disaster… Jesus told them, “Therefore I said to you that you will die in your sins; for if you do not believe that I am He, you will die in your sins.” (John 8:24). Jesus says that if you do not believe that He is the light of the world, the only One who can give you eternal life, then you are going to die in your sins, separated from God forever.

Hell is a place of eternal separation from Christ. In other words, hell is the opposite of being with Christ. It is the absence of God, it is the absence of all that is beautiful, true, lovely, exciting, living ,and fulfilling. But please understand – God does not send anyone to hell. People send themselves there by refusing to hear and believe the claims of Jesus Christ (cf. John 3:18).

Isn’t it amazing to see how much Jesus deals with these men in their blindness. These are not words of anger or accusation or condemnation from Christ. This is an earnest pleading on Jesus’ part: “You will die in your sins unless you trust in Me alone as your only hope of heaven.” But in their pride, they were blinded to the truth of Christ’s claim. They rejected Jesus’ word because they thought they were good enough already; they thought they did not deserve any rejection from God.

Imagine coming to the end of your life and you hear Jesus say, “You will die in your sins” without forgiveness or everlasting life. Why? Because you refused to believe or trust in Christ alone to forgive all your sins and give you everlasting life. Once you die,  there is no second chance. The Bible says, “It is appointed for men to die once, but after this the judgment.” (Hebrews 9:27). Are you prepared to face Jesus Christ as your Judge?

Do you believe this? Do you believe that Jesus guarantees a future resurrection and never-ending life to all who believe in Him? He alone has the power to do this because He died for all our sins on the cross and rose from the dead (I Corinthians 15:1-6) ,proving that He is God (Romans 1:3-4). No amount of our prayers or good works can take away our sins (Isaiah 64:6). But because God loves us so much, He sent His Only Son, Jesus Christ, to earth over two thousand years ago. Christ lived a perfect life and died a criminal’s death on the cross to pay the full penalty for all our sins (John 19:30). Three days later He rose from the dead and He is alive today offering eternal life freely to those who will believe in Him.

Make this the best day of your life by taking Jesus at His Word when He said, “I am the resurrection and the life. He who believes in Me, though he may die, he shall live.  And whoever lives and believes in Me shall never die. Do you believe this.” (John 11:25-26).

Prayer: Lord Jesus, I beg You to rescue those who are perishing without Your gift of everlasting life. Many people think that heaven is a reward for doing good. They fail to understand that their performance cannot save them from eternal punishment. Only Your shed blood on the cross can save them. Heaven is reserved for those who trust in You and Your finished work on the cross alone as the only basis for entrance into heaven. Lord, You do not desire that anyone will perish in hell, but that all will change their minds about whatever is keeping them from believing in You, and then believe in You alone to provide a future bodily resurrection and never-ending life. Then and only then can they avoid hearing You say, “You will die in your sins.” In Jesus’ precious name. Amen.